Events of CINB in November 2018

2 “Supplement of teaching and cultural materials to all school districts”
CINB distributed the teaching and cultural materials donated by Qufu Normal University according to the actual needs of each teaching spot. Wushu teaching is featured in the northern school district. Opera teaching is added to the trilingual school, while Moncton district has corresponding teaching of Chinese clothes and tea art. In line with the principle of circulating and recycling, we should give full play to the maximum value of these materials. The teaching aids supplied will play an important role in the Chinese teaching and cultural promotion in NB. In particular, lion dancing, dragon dancing, Chinese drums, Taiji sword and other cultural supplies increase the diversity of cultural courses and enable the students of CI to better appreciate the excellent traditional Chinese culture. 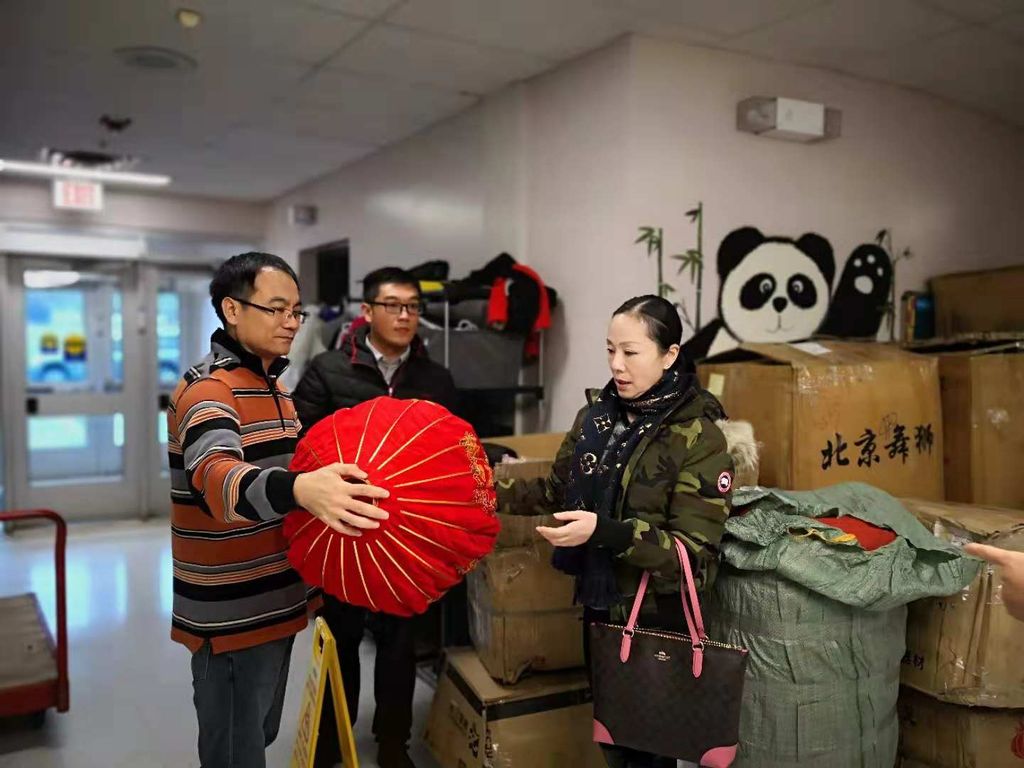 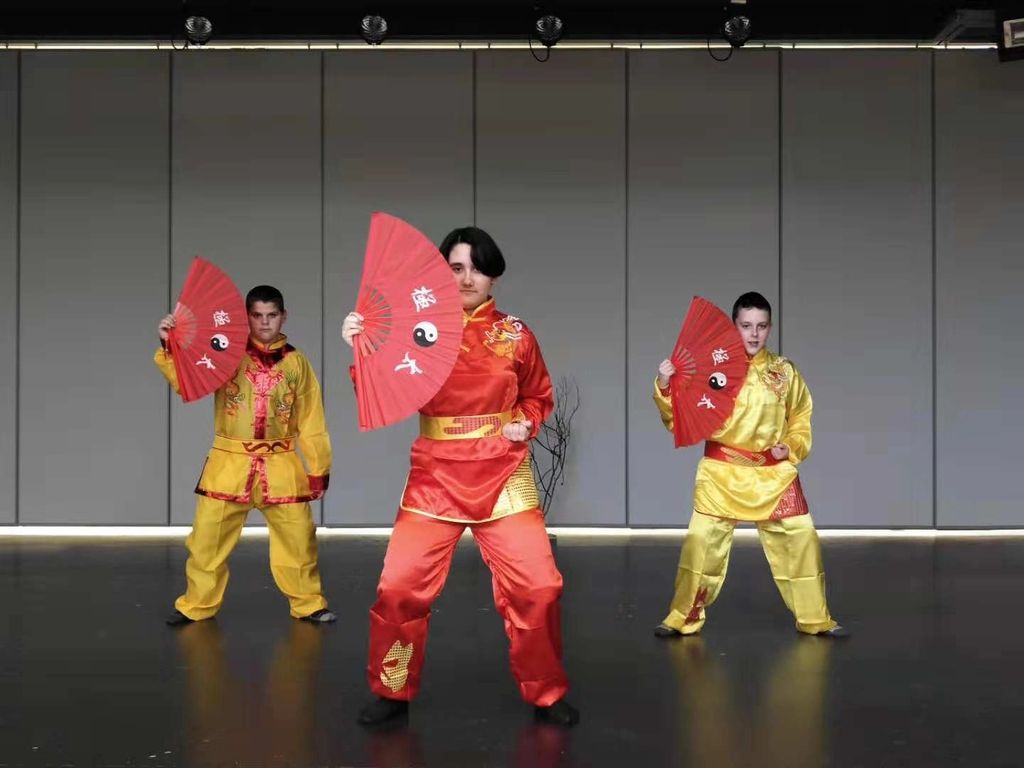 3 “China and the West are contrasted through different shades of ink and wash paintings.”
CINB invited Liang Lixia, a local Chinese painting enthusiast, to teach Chinese traditional painting at various teaching spots. In primary schools, Ms. Liang introduced the differences between Chinese ink painting and Western oil painting to children, and showed some of her works, which aroused students’ gasps in admiration. Then she demonstrated how to draw a crab with a brush in an easy-to-understand way. The crab’s belly, whisker and legs are very lifelike with a few strokes. Under the guidance of the teacher, the students carefully tested the color on the edge of Xuan Paper, adjusted the shades and drew the pictures under the teacher’s instruction. The students who comprehended faster had already drawn a crab family excitedly. In high school, Ms. Liang taught students to draw bamboos and Chinese calligraphy. The students wrote “中国”and“加拿大”on real Xuan Paper for the first time. After drawing bamboos-the food for pandas, they were full of accomplishment. 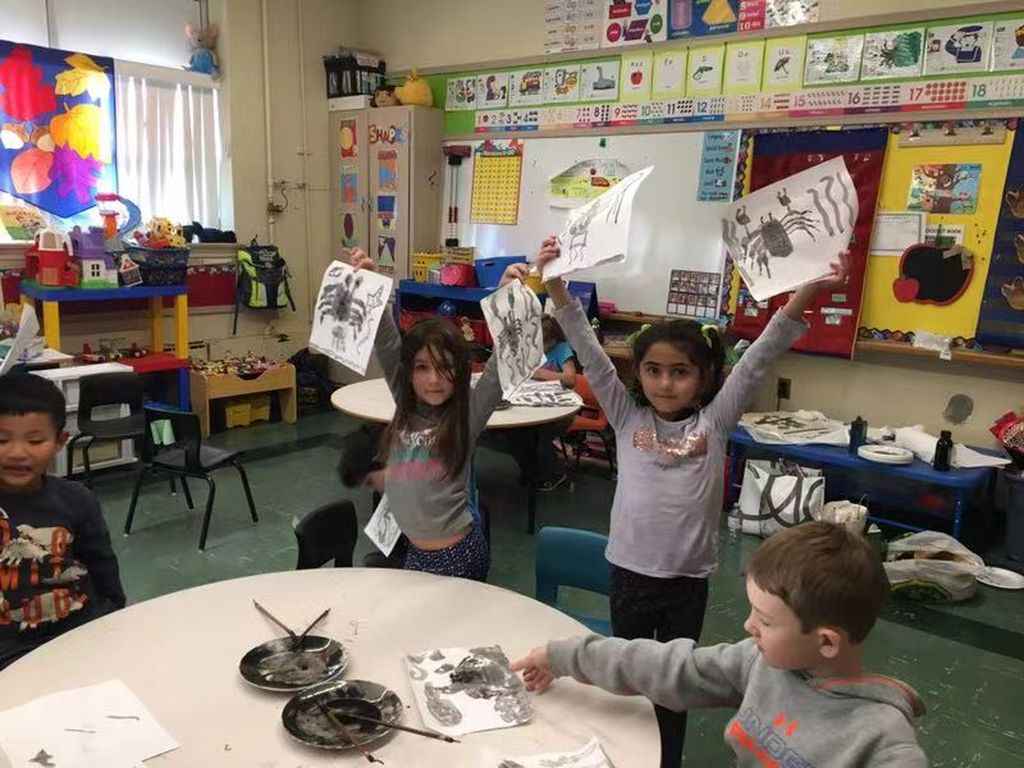 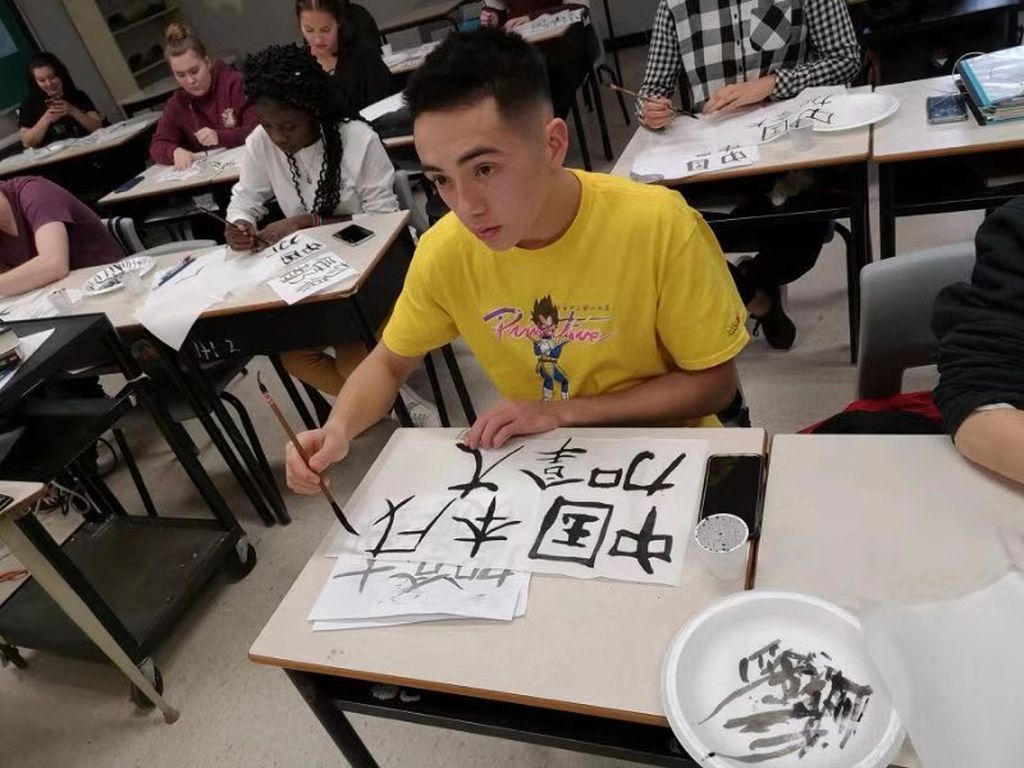 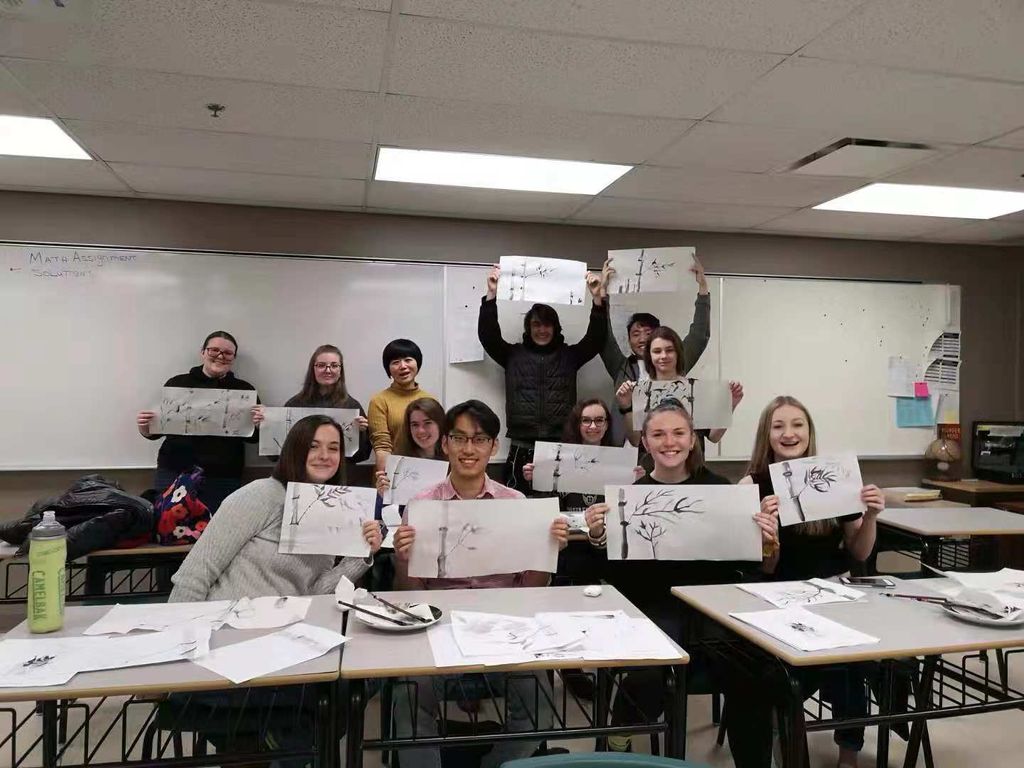 4 “Creating Chinese cultural boutique with joint efforts”
On November 6th, Ms. Pei Yan, the first-class actor of the National Yue Opera, visited the trilingual school accompanied by the teachers of CINB. CINB welcomed Ms. Pei Yan and introduced the development and achievements of CI in recent years. Ms. Pei Yan thanked CINB for its invitation and talked professionally on the functions of teaching aids including lion dancing, dragon dancing, Taiji sword and Chinese drum, etc. then she gave instructions on Chinese dance and opera to the triplet sisters-Dingmei, Dingju and Dinglan. Ms. Pei Yan said the triplet sisters had good image, good temperament, solid dance skills, they could quickly grasp the essentials of action and they were talents that could be shaped. Ms. Pei also gave instructive suggestions on stage design, basic dance essentials etc. according to actual situation. She would give full cooperation to CINB to create brand-new spokespersons for the trilingual school and Chinese culture. 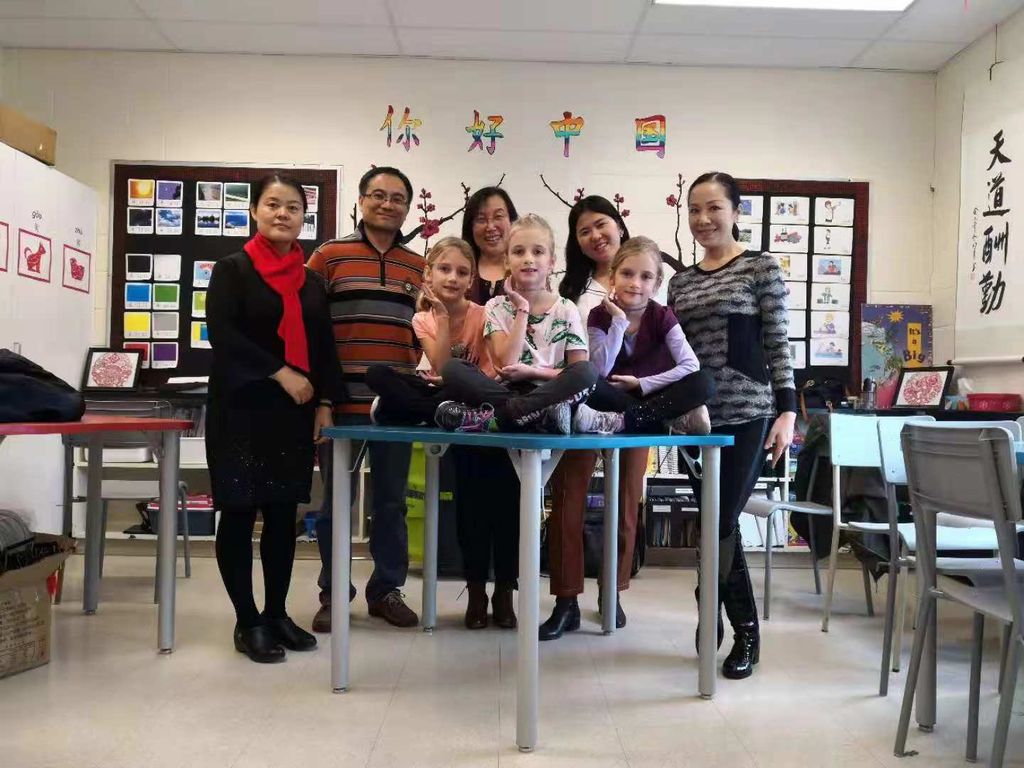 5 “Teachers of CI went to St. John’s Southern District Education Bureau for a meeting”
On the morning of November 9th, teachers of CINB attended a meeting in St. John’s Southern District Education Bureau and presented an atlas of the events of CINB, introduced the relevant projects to the officials of the Education Bureau: Lynn, Gary and Jennifer from AEI. The Officials of the Education Bureau said they would introduce the Chinese language teaching program to all St. John’s schools and ask them for their willingness. CINB also discussed with the officials the forms of class development in senior middle schools, junior middle schools and primary schools and the two sides agreed that language and culture teaching should be the main part of teaching and various activities should be supplemented, reflecting the characteristics of cross-culture and multi-culture, so that students could broaden their horizons and learn happily. 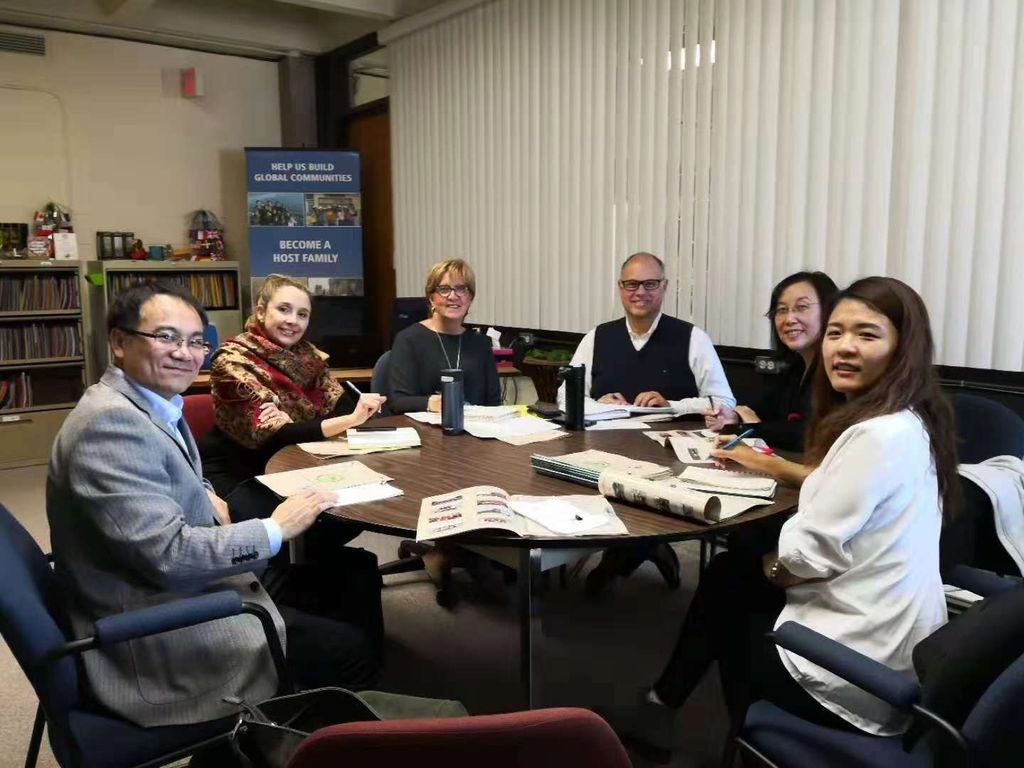 In that afternoon, teachers of CINB visited professor Yang Jian and Ms. Pei Yan and discussed the education of the triplet sisters in the trilingual school in Fredericton. Professor Yang and Ms. Pei gave feasible plans and detailed implementation rules from a professional point of view. Director Teng Jing said that she would invite them as CINB art consultants to tailor the repertoire for the triplets and create high-level opera talents. 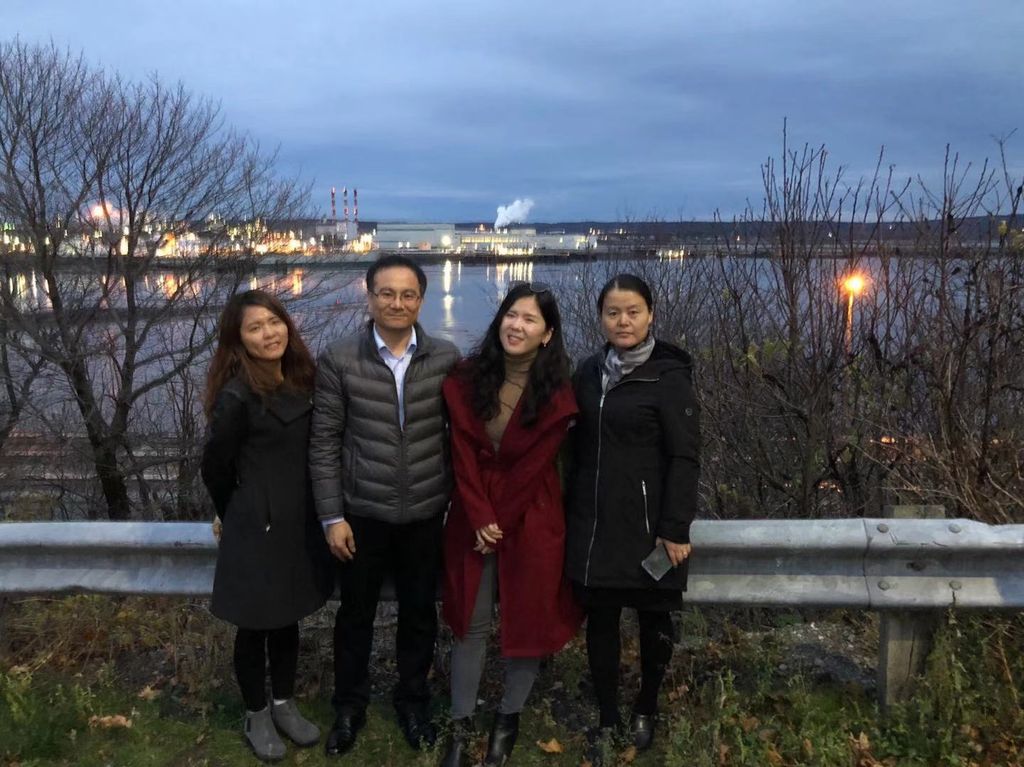 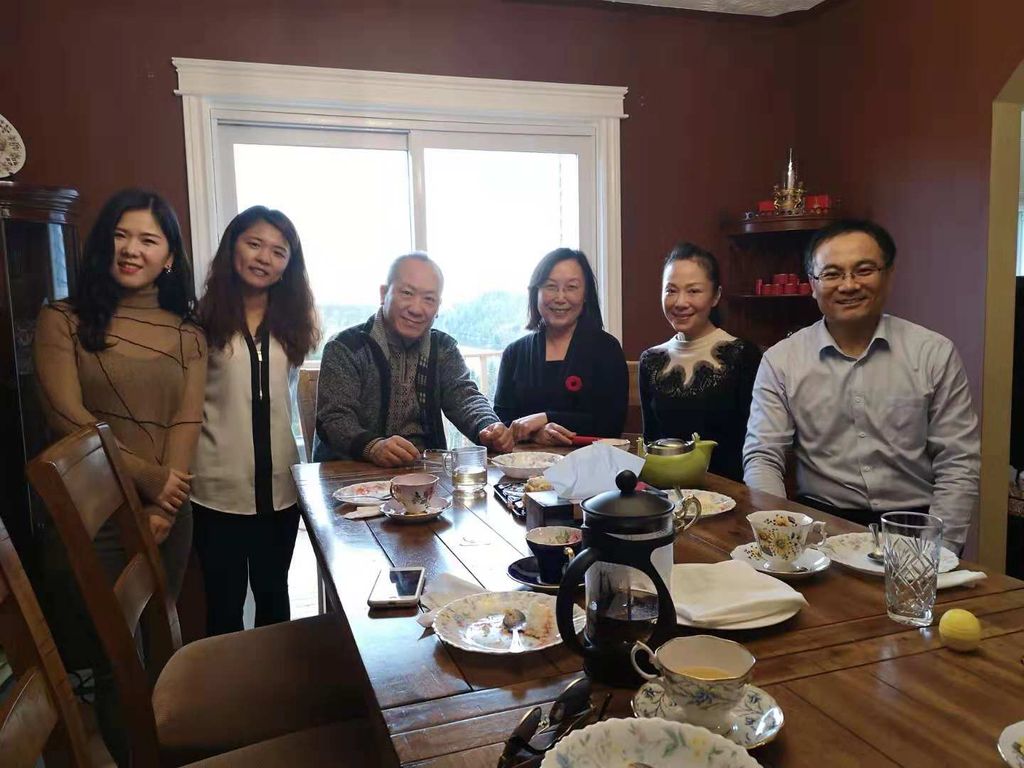 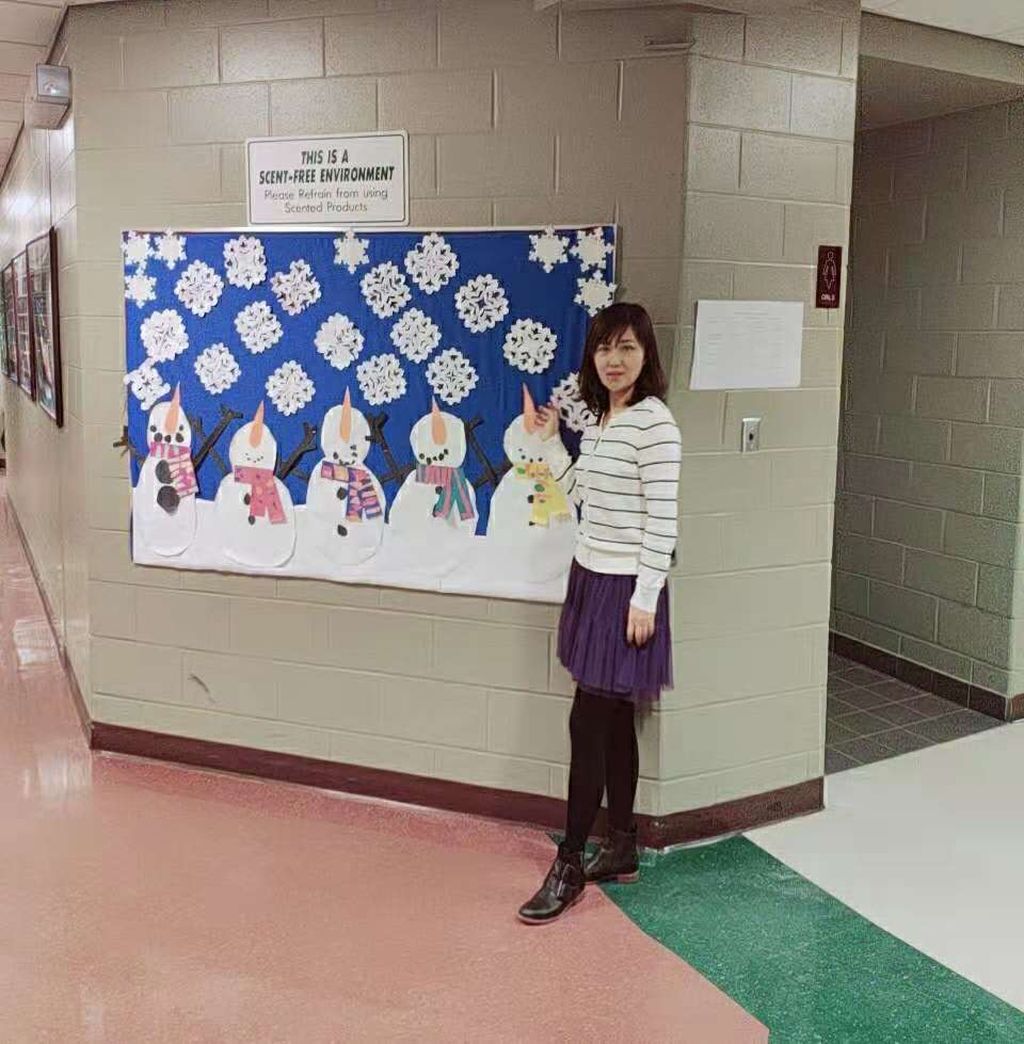 7 “Multicultural exchange and blending”
On the evening of November 15th, Liu Shujie and Li Nannan, Chinese teachers of CINB, were invited to attend the annual International Night of St. John High School. They had a multicultural collision with many other community organizations from different countries. CINB was the only unit invited to show Chinese culture that evening. It consisting of the award-winning lantern riddle area, the fragrant tea art area, the calligraphy area for exhibiting one’s skills, and the interesting game area. The distinctive features of eating, drinking, playing and learning had attracted many audiences to stop and experience. 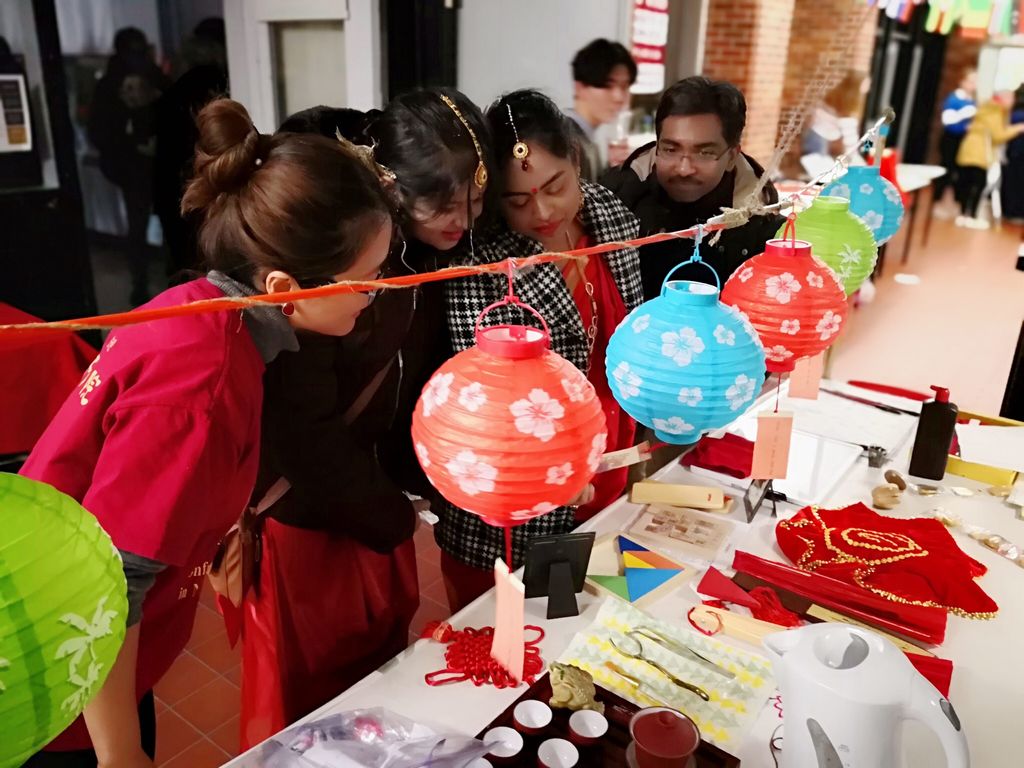 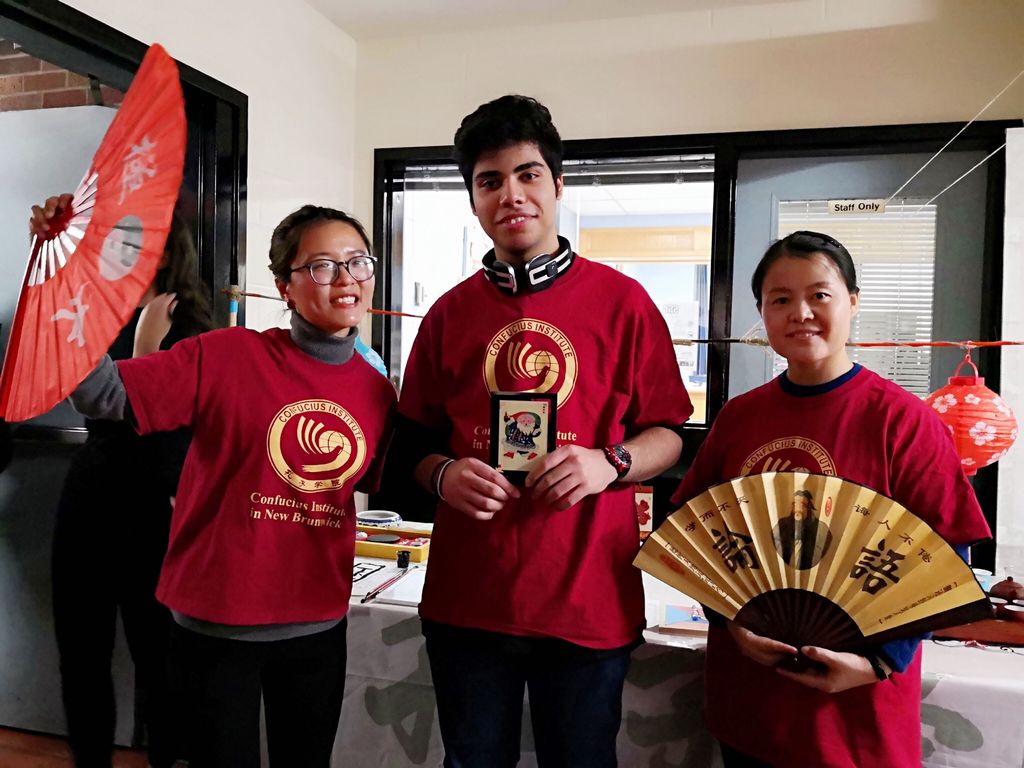 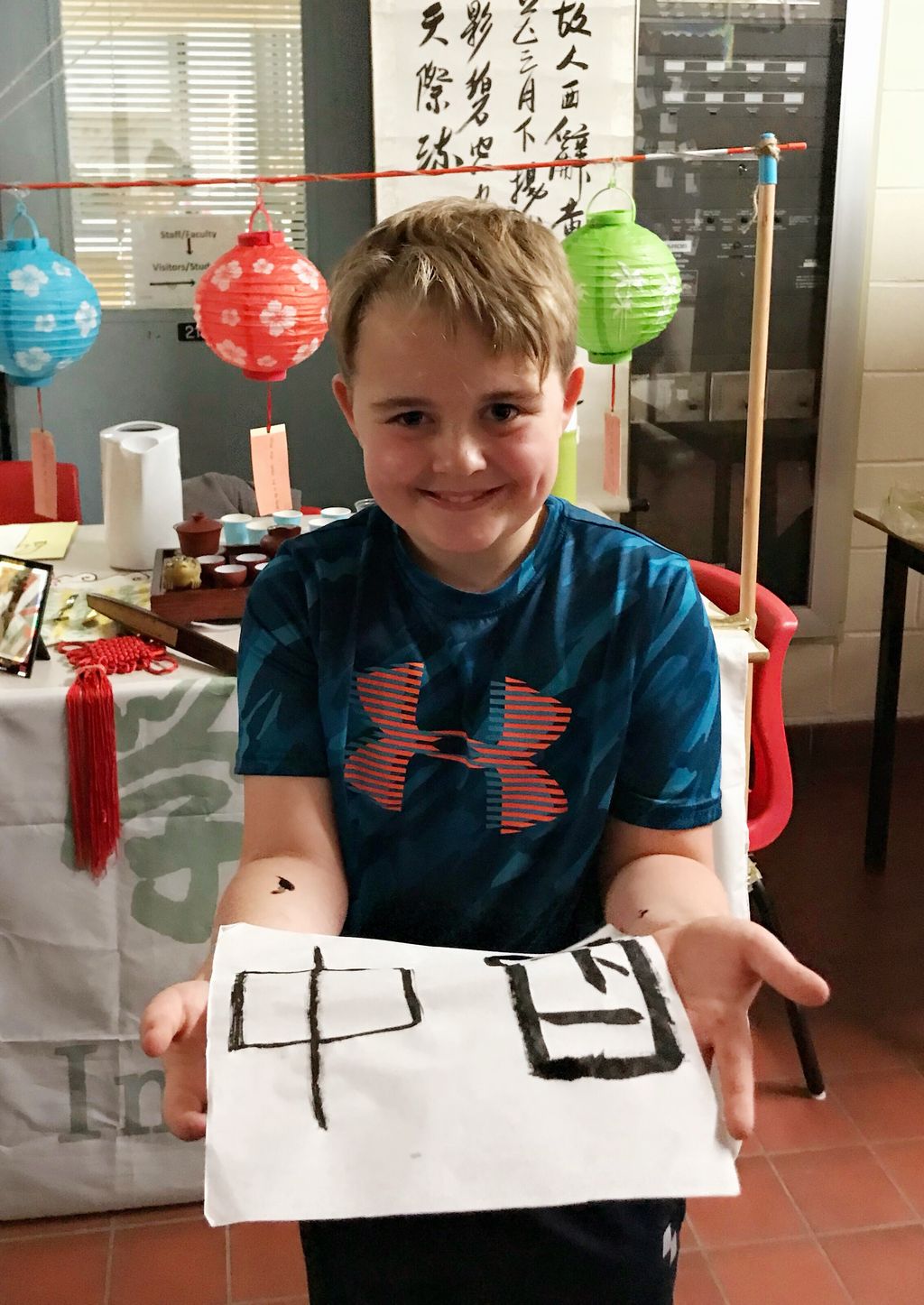 8 “CINB Participated in Chess Promotion Forum”
On Nov. 16th, director of CINB was invited to attend the chess promotion forum of CI in Quebec. Dong Bo attended it and made a speech. This event aimed to promote the development of Canadian Chess Campus Activities in conjunction with relevant Confucius Institutes and Chess Clubs. CINB would make every effort to improve the promotion and dissemination of chess in accordance with local conditions. 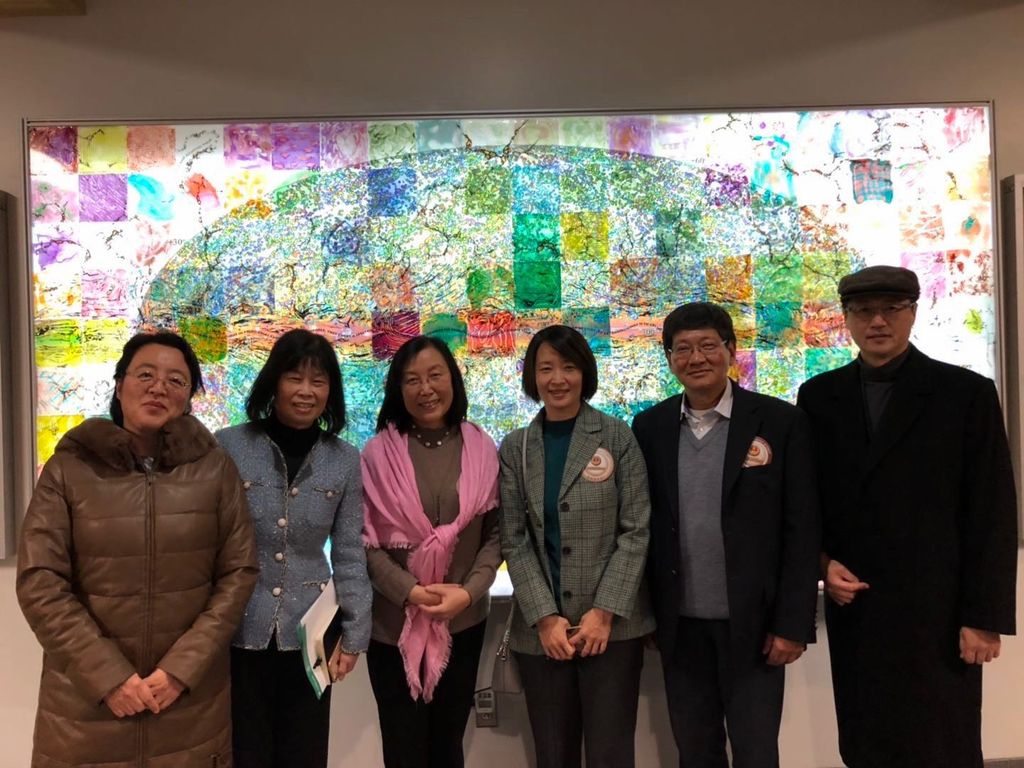 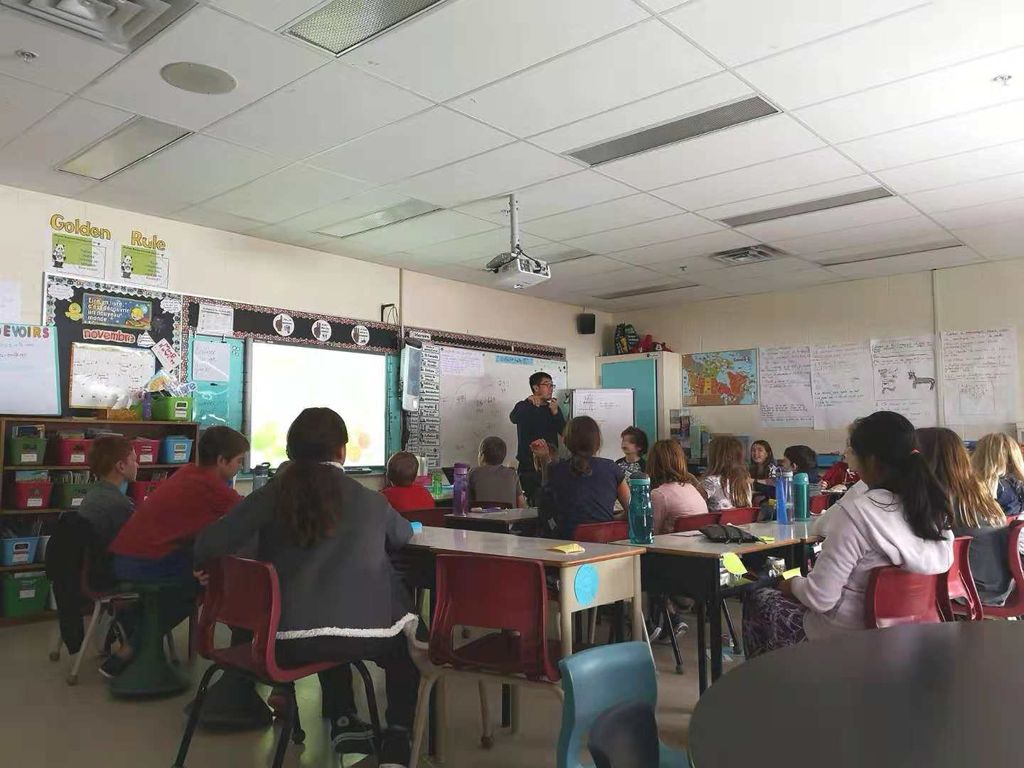 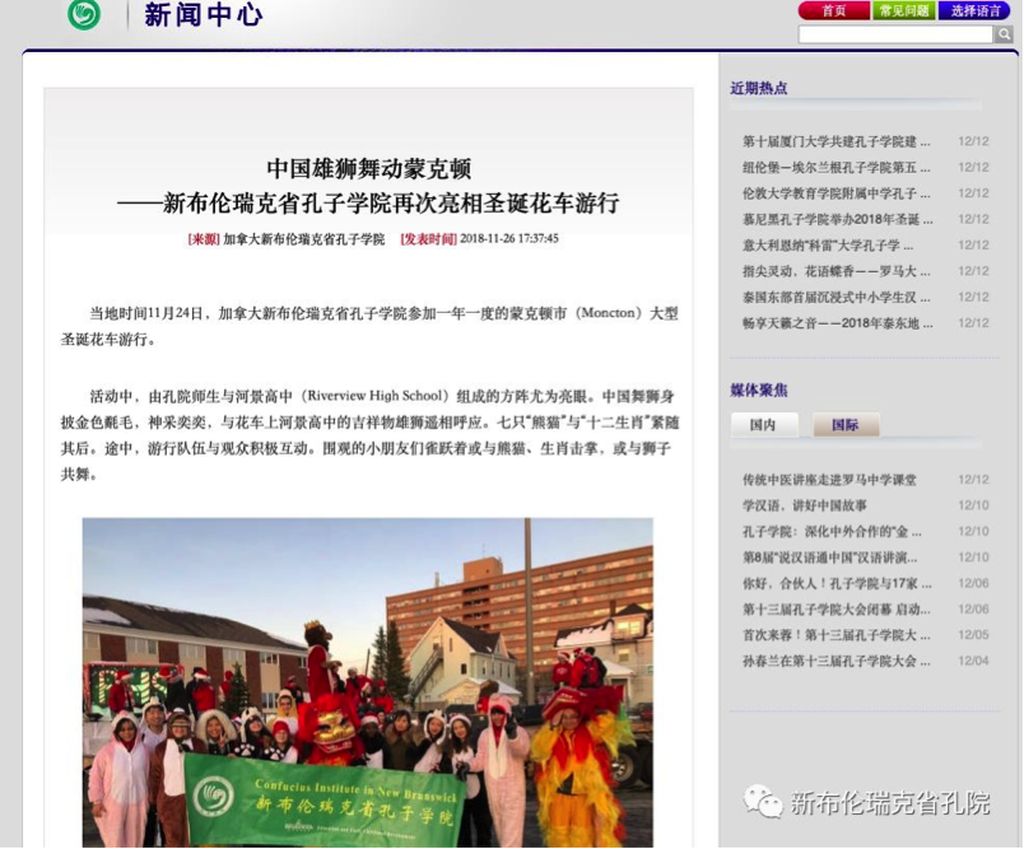 During the activity, the square array composed of teachers and students of CI and Riverview High School was particularly eye-catching. The Chinese dancing lions, with their golden coats and brilliant appearances, echoed the mascot lion of Riverview High School on the float. Seven “pandas” and twelve zodiac animals followed them. On the way, the parade team actively interacted with the audience. The children around cheered or clapped hands with pandas, zodiacs, or danced with lions. Eason, a high school student from Riverview High School who took part in the parade with CI for the first time, said excitedly, “It’s so interesting! Next year I will definitely attend it again. I want to learn Chinese too!” 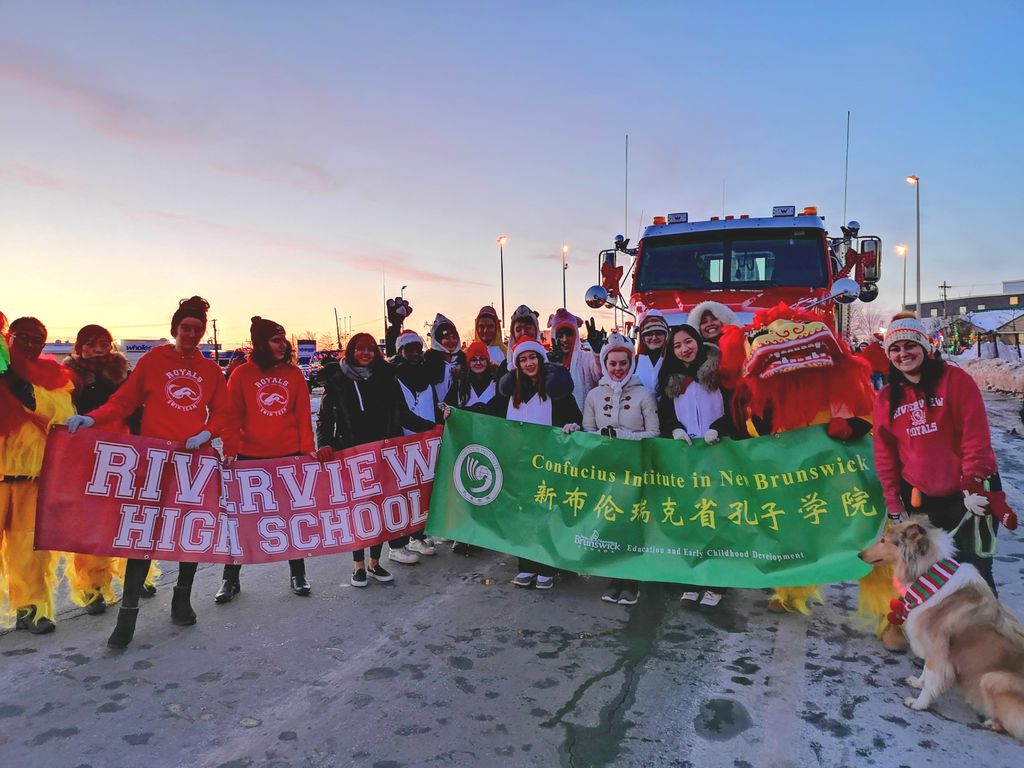 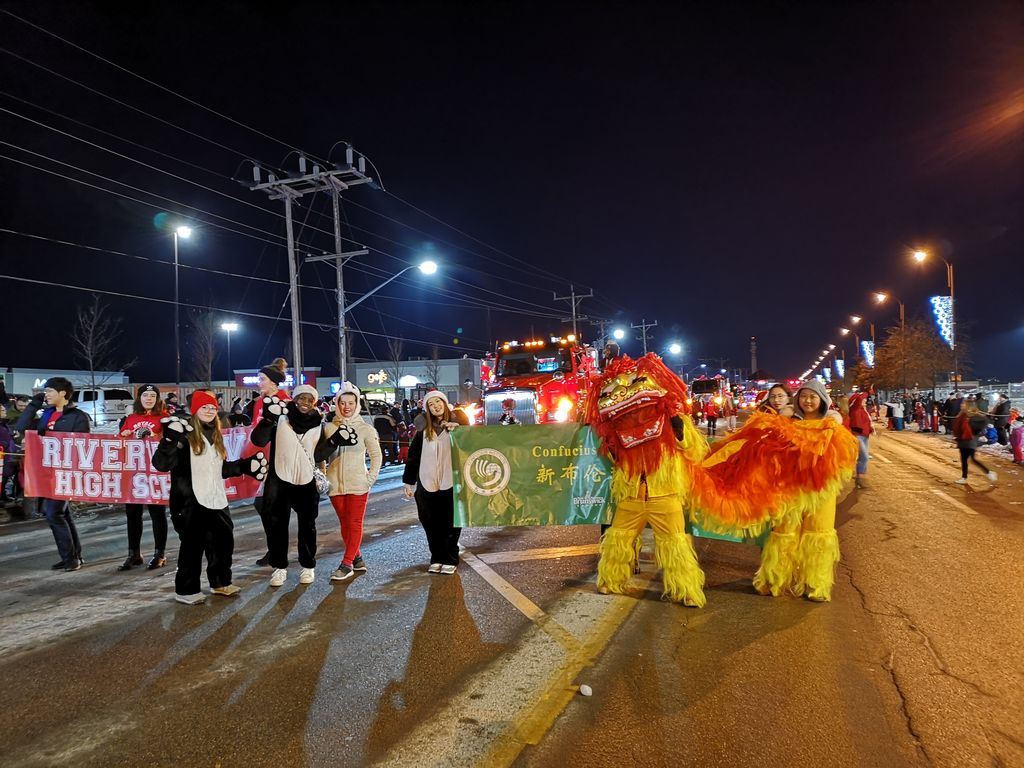 The success of this parade was not only due to the help of cultural and educational materials presented by Qufu Normal University, but also the result of the careful planning and full cooperation between teachers and students of CI. Participation in the Christmas parade is an annual essential project of CINB. It is a good opportunity to show the local people the style of CI and Chinese culture as well as a chance for CI to expect Christmas with local people together and to merge into the multi-culture.

11 “ Accumulate steadily and break forth vastly, CINB receive the laurel again.”
Liu Xiaowei, a Chinese teacher of CINB, won the honorary title of “Excellent Volunteer in Canada” in 2018. 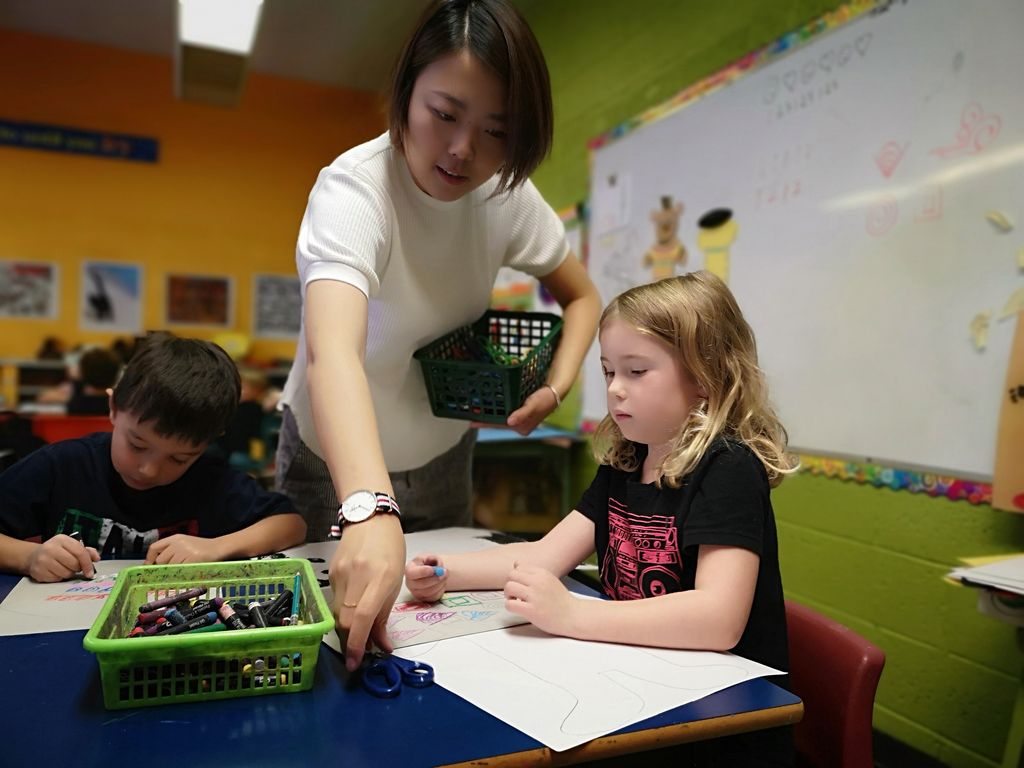 12 "Charming Shadow figures entering Chinese classroom"
In November, the primary school of Oromocto School District launched a theme activity of Chinese culture. Charming shadow play, magical Chinese characters, Peking Opera facial masks, color matching ribbon dance and so on entered the classroom one after another. The Chinese class became richer and more interesting, especially the charming shadow play, which was warmly welcomed by children. Chinese teacher Li Yanmei, introduced the production process and artistic features of shadow play, and then let the children watch the shadow play videos “Journey to the West” and “Wu Song Fighting Tigers”. The wonderful and vivid shadow play, together with interesting music effects and vivid language, aroused the students’ great interest and curiosity. Children vividly arranged and performed their own shadow stories in both English and Chinese, learning and experiencing Chinese excellent traditional culture in cheerful chatting and laughing. 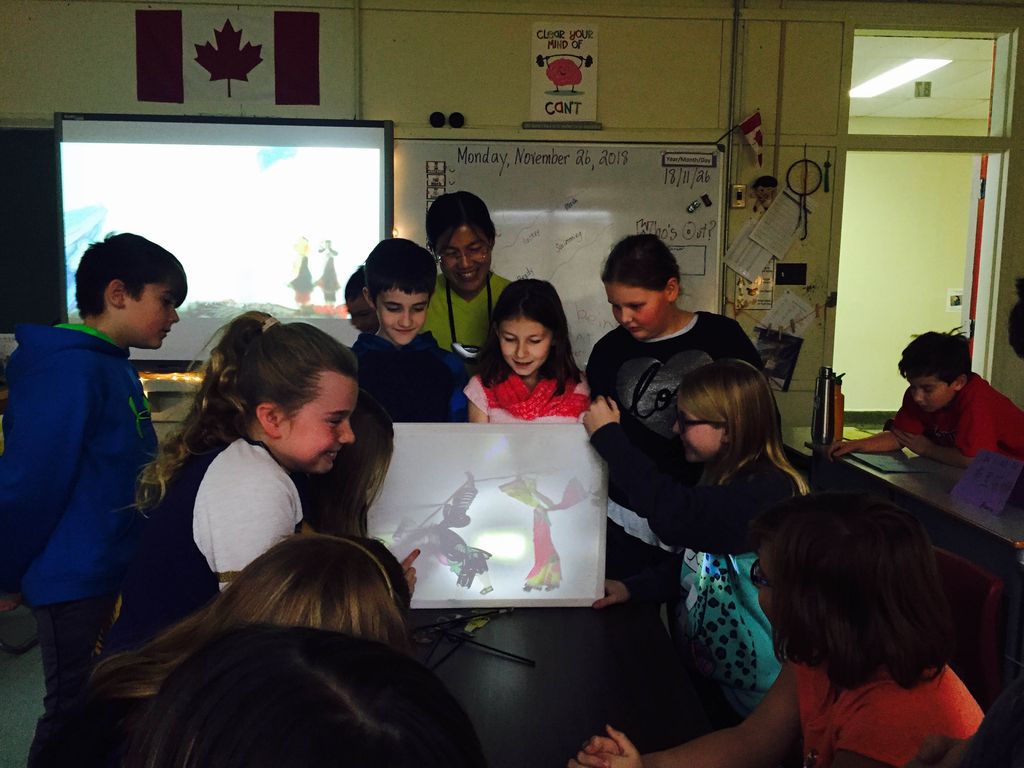 13 “Food activities yielded a lot”
On the afternoon of November 26th, Wang Jingli, a Chinese teacher, and Liang Jiayi, a volunteer teacher, were invited by Ms. Cheryl Warman, coordinator of the community school, to hold a Chinese food experience for the students of the culinary club at Eleanor W. Graham Middle School. Dumpling banquet and fried rice in Chinese style brought different cultural experiences of delicacies to students. The students were guided by the Chinese teachers to make dumpling wrappers, make dumplings and boil dumplings step by step, and finally they tasted and enjoyed their cooking achievements together. After the “first experience” of dumplings, they said they tasted like their favorite, local Perogies. Ethen, a sixth-grade student, said, “Now I have tasted Chinese dumplings. They are delicious and I like them very much. I also find that Chinese and Canadian cuisines are similar, and I want to try more Chinese cuisine in the future.” 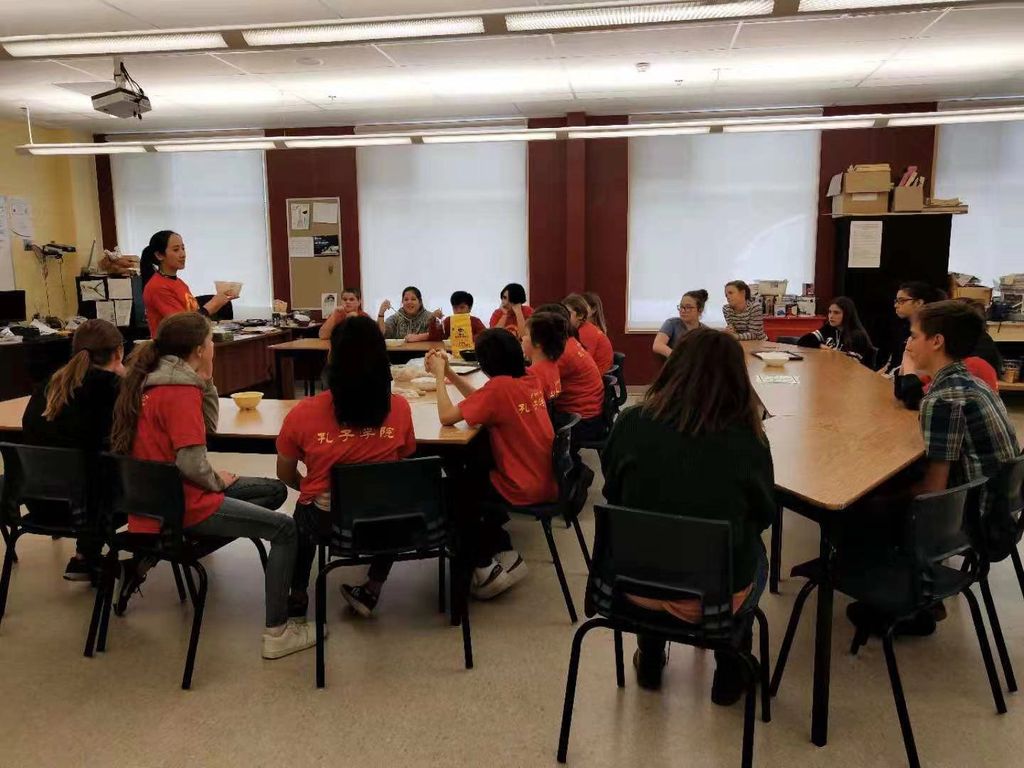 On the evening of the event, Ms. Cheryl Warman posted the news on Facebook. Parents and school principals in the community commented on it and gave their thumbs-up. 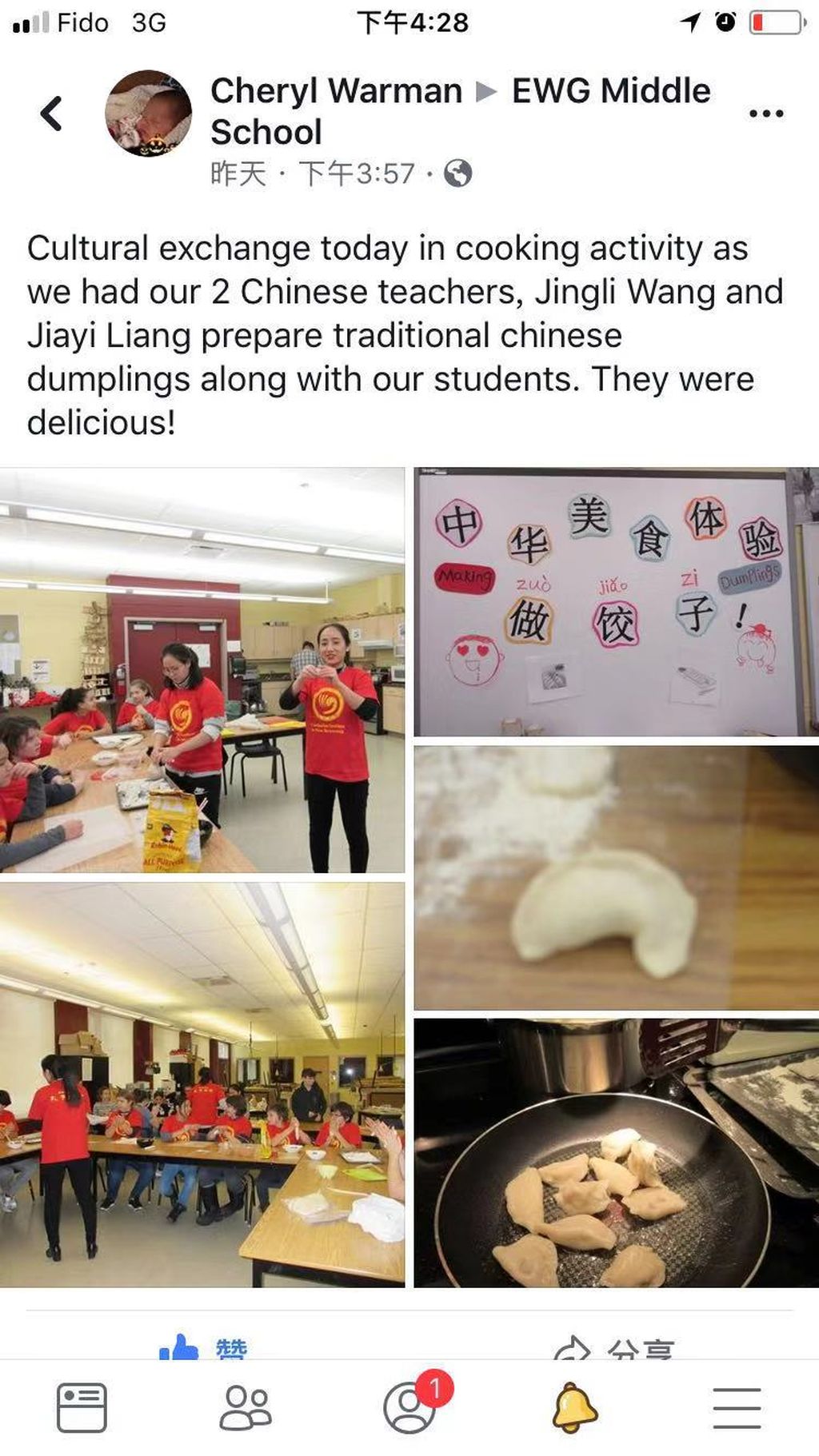 14 “Chinese Song Contest”
On the morning of November 30th, Sun Xiaojiao, a volunteer Chinese teacher, held the first Chinese song contest in Hillcrest Middle School, which was a school-wide competition covering K-8 grades. Even the students of English class of Grade 8 who did not have Chinese courses were voluntarily enrolled in the competition. Sun Xiaojiao chose songs suitable for each grade, and matched them with dances conforming to the theme. The lyrics were relaxed and joyful, and the dances were interesting and easy to learn. Lively and lovely “Little Star” in Kindergarten, “Two Tigers” in the second and third grades, the wonderful “Learning Cat’s Call” in the fourth grade, “Seaweed Dance”, “The Youth Training Manual”, “Sorry for My Dad Chinese”, “Our Time" in the senior grades, together with other wonderful singing and dancing performances, won the applause of the whole school teachers and students. Through the practice of nearly a month, the students had shown the best of themselves.
Finally, the top three were selected by the school teachers. The school principal, Chinese director Dai Zunfeng and volunteer teacher Xu Mengke presented awards and prizes to them on the spot. The principal highly praised the event and affirmed the work of the CI. He considered it fully mobilized the enthusiasm of all people, made the performers more passionate, and the onlookers had a strong sense of participation, which was the proper way to show multi-culture. 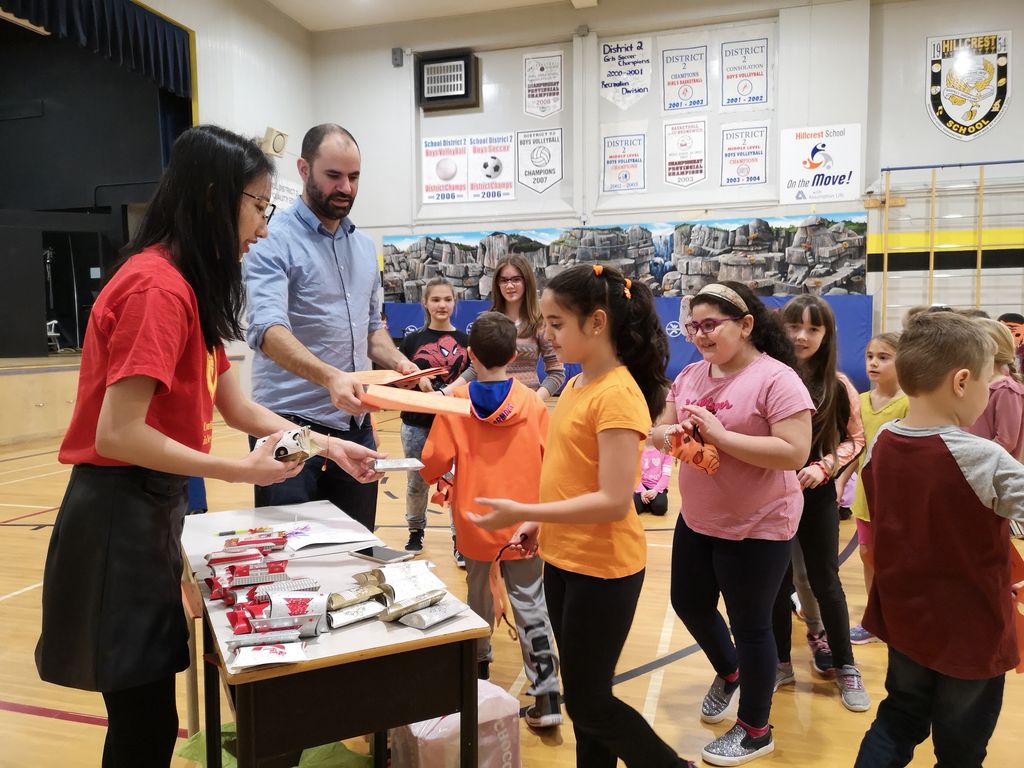 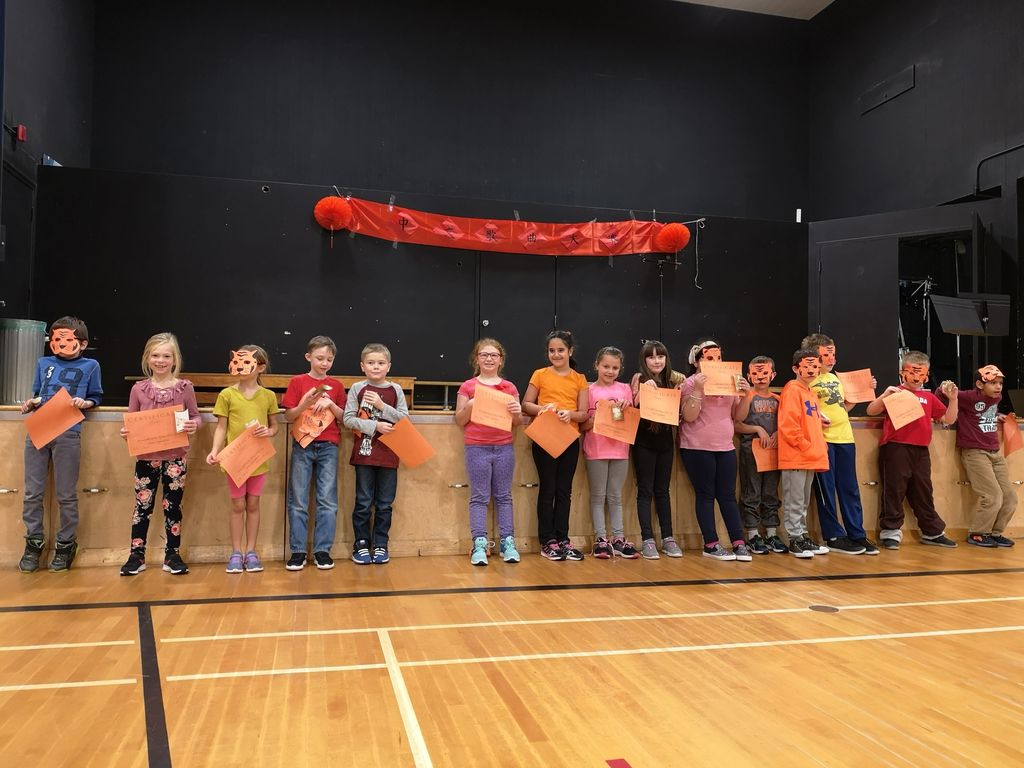 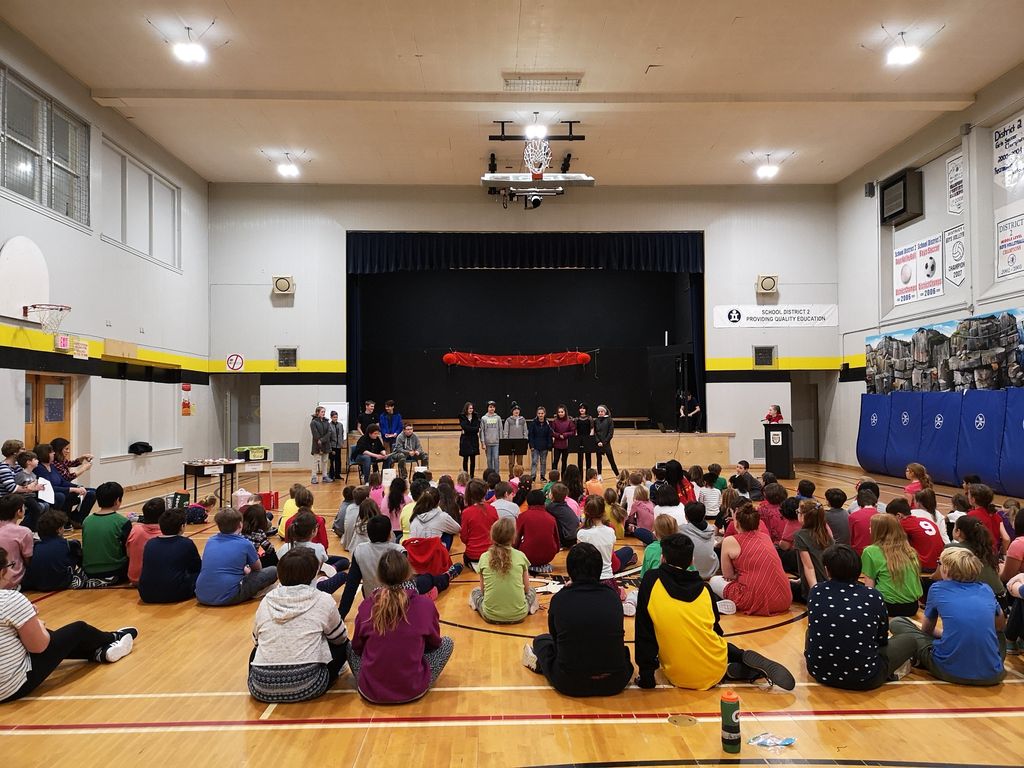 15 “Moving black and red chess pieces to compete in military strategies”
On November 30th, the High School in Oromocto School District launched the Chinese chess experience activity. Chinese teacher Li Yanmei, first introduced the history of chess and the evolution of chess culture. She narrated the cultural origin of Chinese chess from the comparison of general, soldiers, ministers and guards in Chinese chess with king, queen, bishops and knights in World chess. After understanding the rules of Chinese chess, the students had a real experienced of the “competing for hegemony” on a chessboard, and felt the unique charm of Chinese chess culture. Finally, the activity ended in a wonderful game. The students were still lost in the scene and said, “This is a game full of wisdom”. Another student said, "Today is the first time I come into contact with Chinese chess, but I have already fallen in love with chess. I want to buy one to play with my parents." 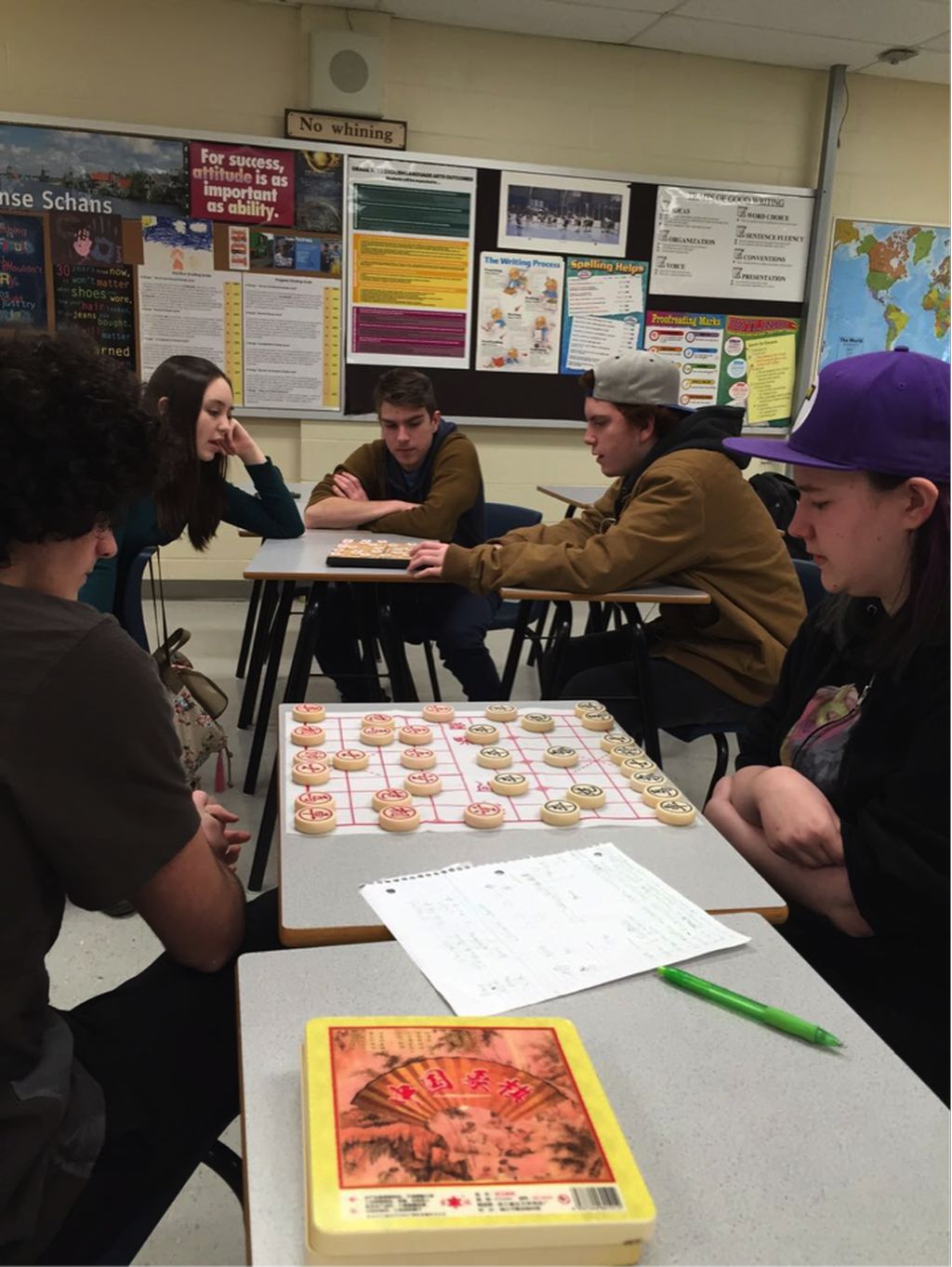