Moving to Saint John from Miramichi prior to Christmas in 2015, I began to teach in three schools— Saint John High School, St. Malachy's Memorial High School and Harbor View high school. I led a group of students to perform at local Chinese Spring Festival gala. After a few rehearsals, the students actively cooperated in the show.

Rothesay Park School is small school with a staff of 200. The gym can only hold one class. Therefore, after consulting with the Physical Education teachers, we decided to split the class. During the first half of a period the students would do the regular activities with their P.E. teacher and the second half learn Chinese martial arts with me. Every class had four or five learning opportunities.

Harry Miller Middle School has around 400 students. One or two classes used the gym each period. The P.E. teacher is very friendly to me. Each period he gave me half the class. Accompanied by another teacher, I taught these students in the school library. Every time they would help me move the tables aside so as to get ready for the class. If there was only one class in the gym, I would be able to take the entire class. 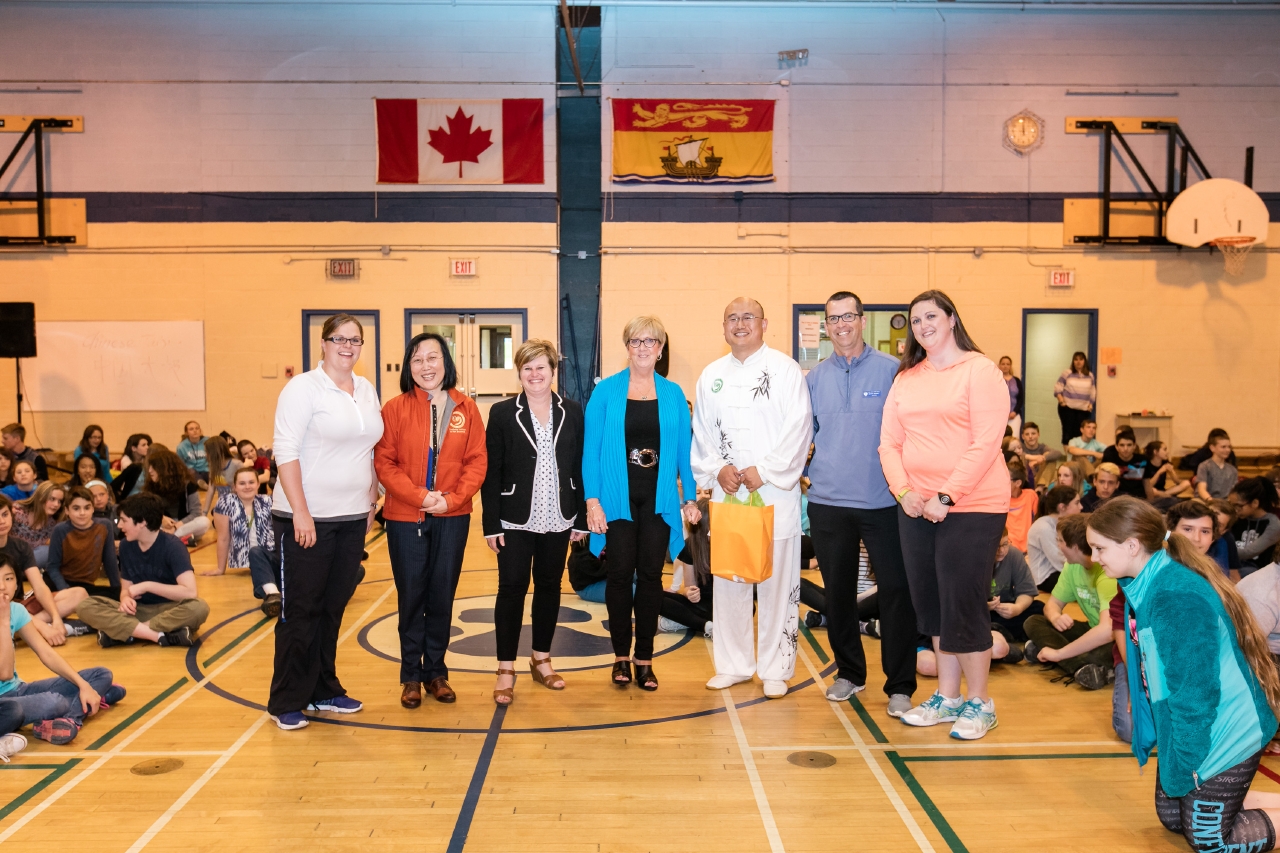 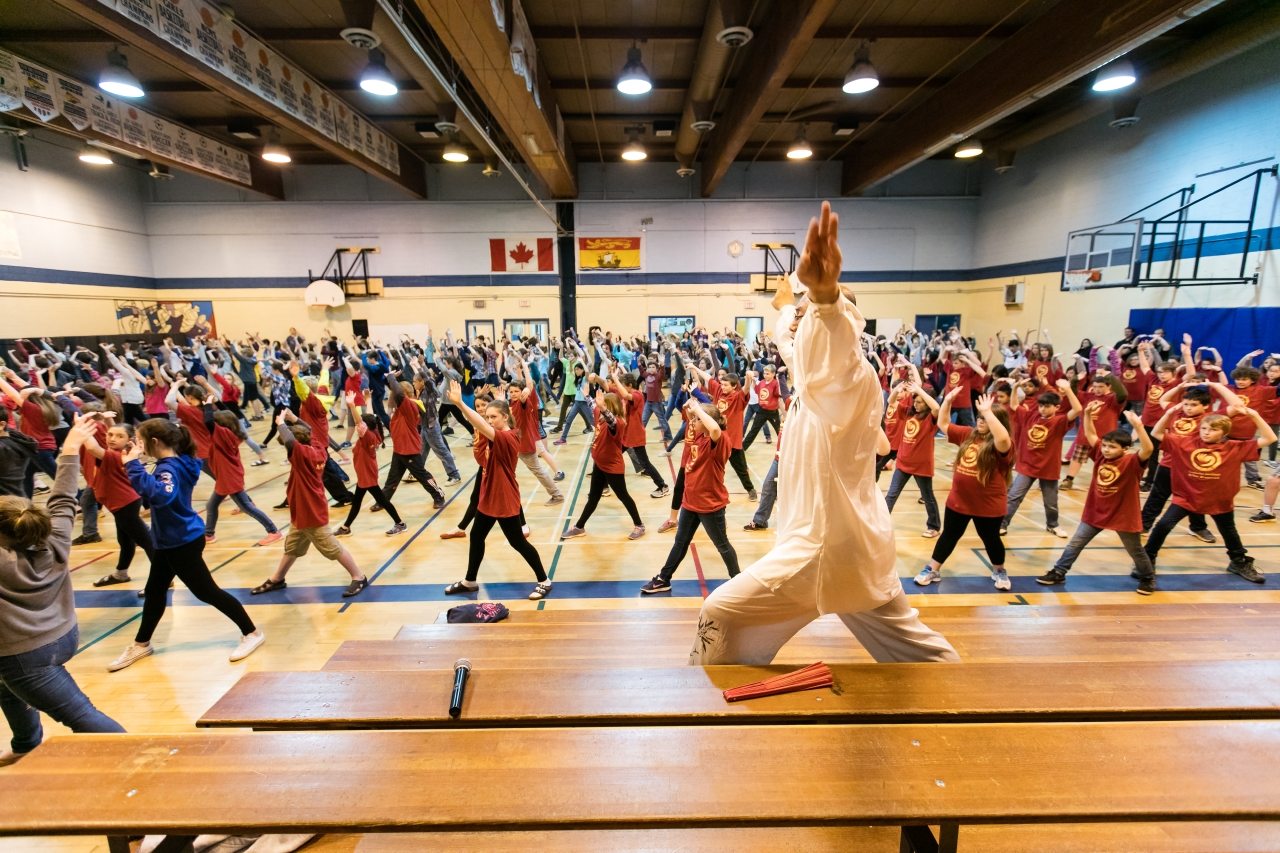 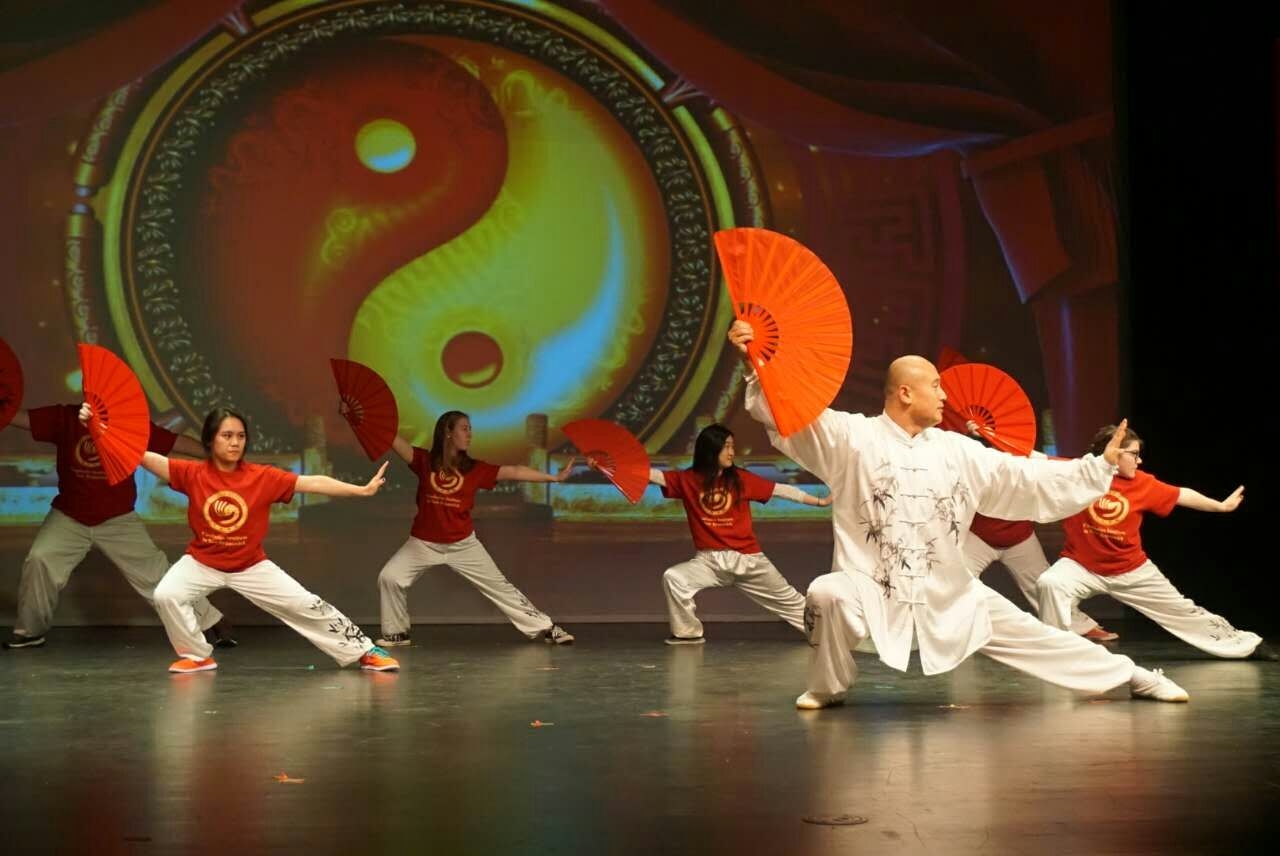 Quispamsis Middle School is larger and there are more than 500 students. The gym can hold two classes at the same time. The teacher who was in charge of physical education made me a very detailed curriculum schedule. Each period I had a group of students in the cafeteria. Without any other teacher accompanying and monitoring, disciplining the students was a big challenge for me. Fortunately, most of the students were very respectful and active. Thus we had quite a satisfying outcome in a short time.

By the end of the experiencing course, I organized a martial arts presentation for the teachers and students in each school. Mrs. Teng Jing, foreign director of CINB also joined these events.

On the afternoon of May 26, 2016, Rothesay Park school all teachers and students gathered in the playground to practice martial arts under the blue sky and white clouds, breathing the fresh air. Everyone was in the mood. It was a very successful presentation. When the students learnt that I would leave at the end of the course, they bided me farewell with affection.

on May 30th, 2016，I organized activities in the gym in Harry Miller middle school. At the beginning of the event, the principle addressed the staff in recognition of my efforts in introducing martial arts to the students, and presented me a gift. Lynn also attended the event and highly praised on my work. Then, I took the students to review the main content of the course, and led the students to practice together. After practicing, I performed Chen style Taijiquan . The P.E. teacher invited a few students to demonstrate the five step boxing with me. The students showed excellence in their moves. I was very grateful for their support and corporation.

On the afternoon of June 1st, 2016, more than 500 people gathered in the gym in Quispamsis Middle School. The principle made an opening speech. I took the students to review the main content of their study, performed the Teens Boxing routines, Five steps Fan, Chen Style Taijiquan, explained the basic requirements of the using a sword, and demonstrated basic moves of a sword. All the teachers and students were excited! Finally, I invited all the Grade six students to practice the Chinese martial arts basic moves. I was deeply touched by the warm applause and cheers from students.

Inside schools, the students that participated in martial arts experiencing course summed up to about 1500 during my stay in St. John. The seeds of Chinese martial arts have been planted in New Brunswick schools! Outside schools, I also had the chance to perform for the elders in Saint. John's homes with the Jasmine Flower art troupe. I was invited to the karate Hall to communicate with local martial arts practitioners. Moreover, I performed at the Asian Heritage Month opening ceremony. Wish that Chinese martial arts could take root in New Brunswick and blossom everywhere. My work here has been successfully completed and I believe that it will be the most glorious page in my memoir.