Celebration Activities of the 10th Anniversary of CINB

2. The Board of Directors meeting of CINB.

3. The banquet for the 10th anniversary. 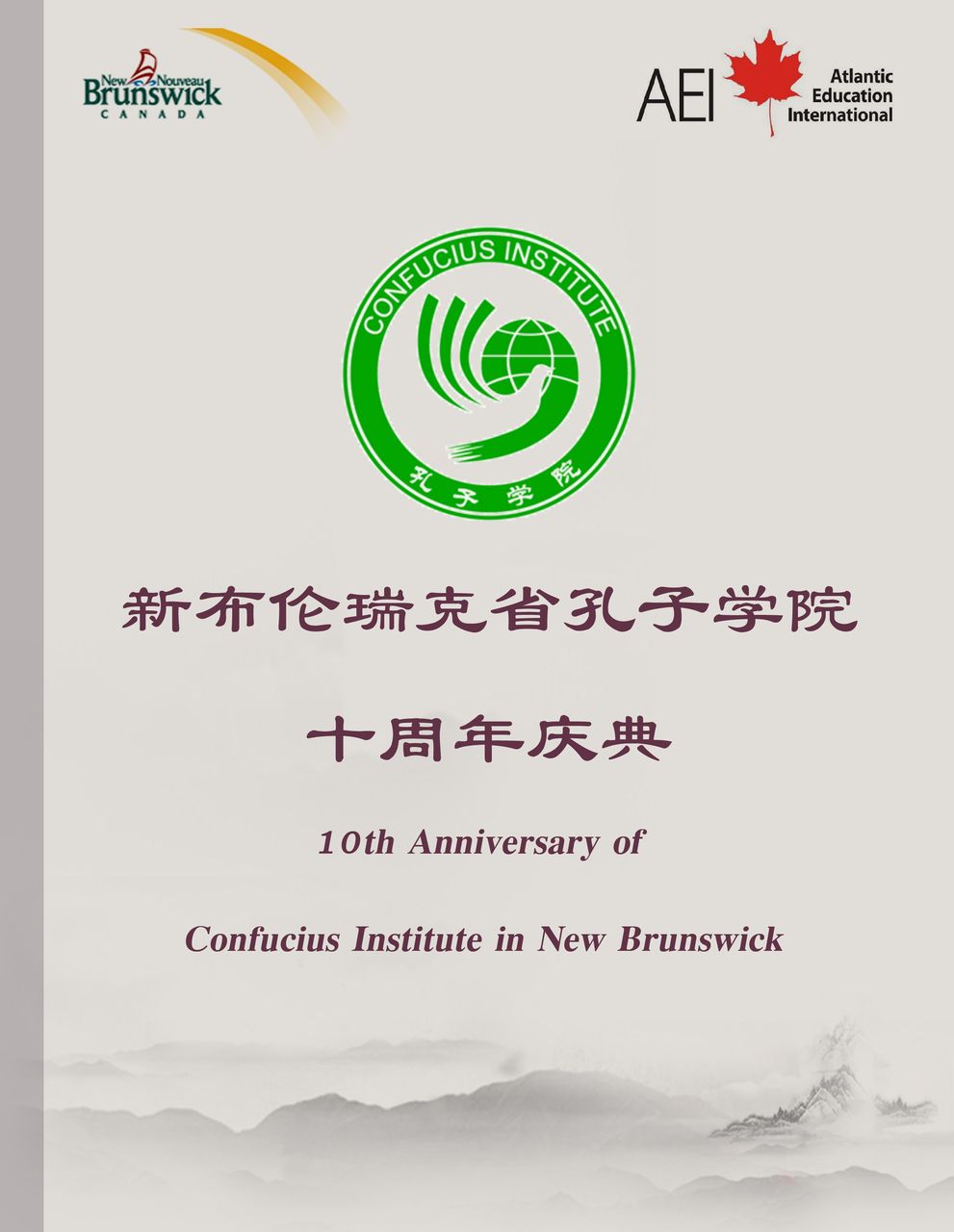 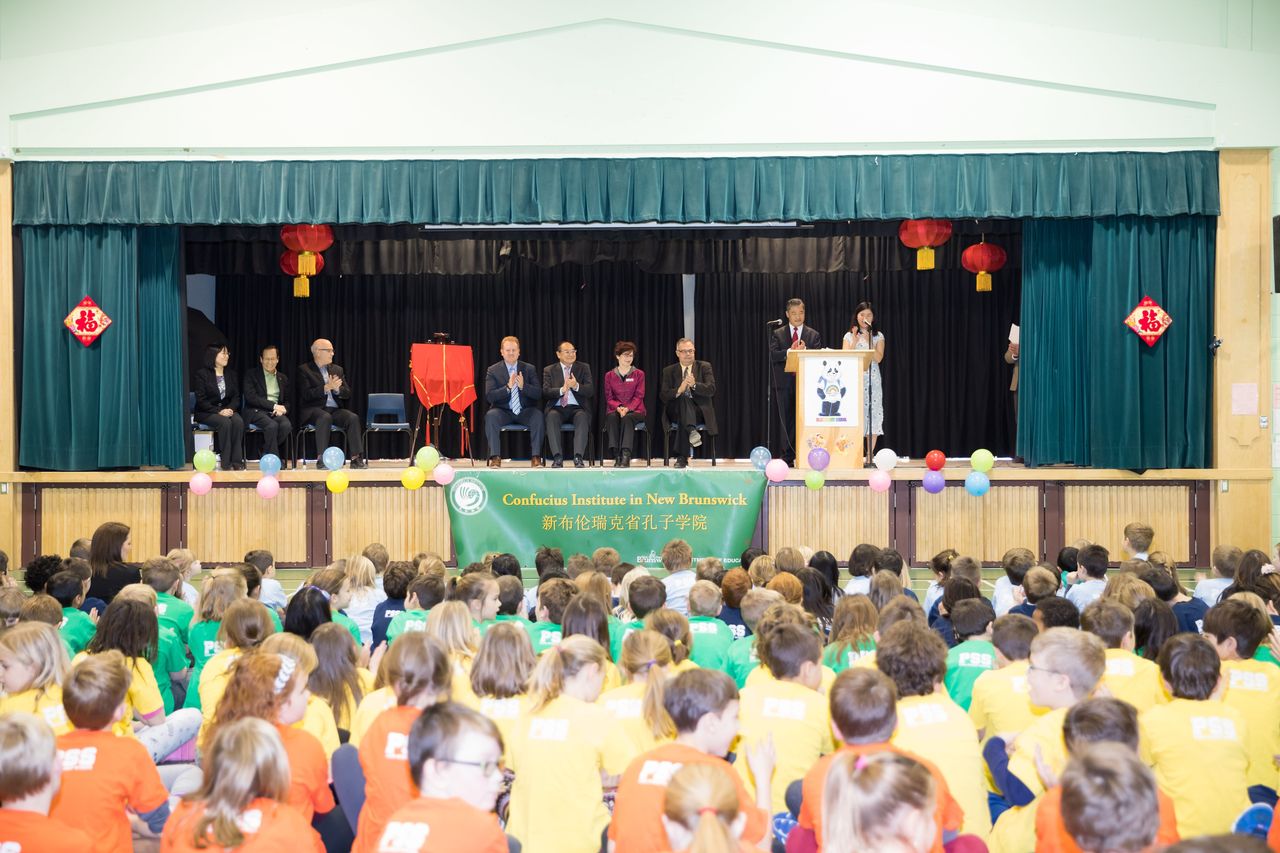 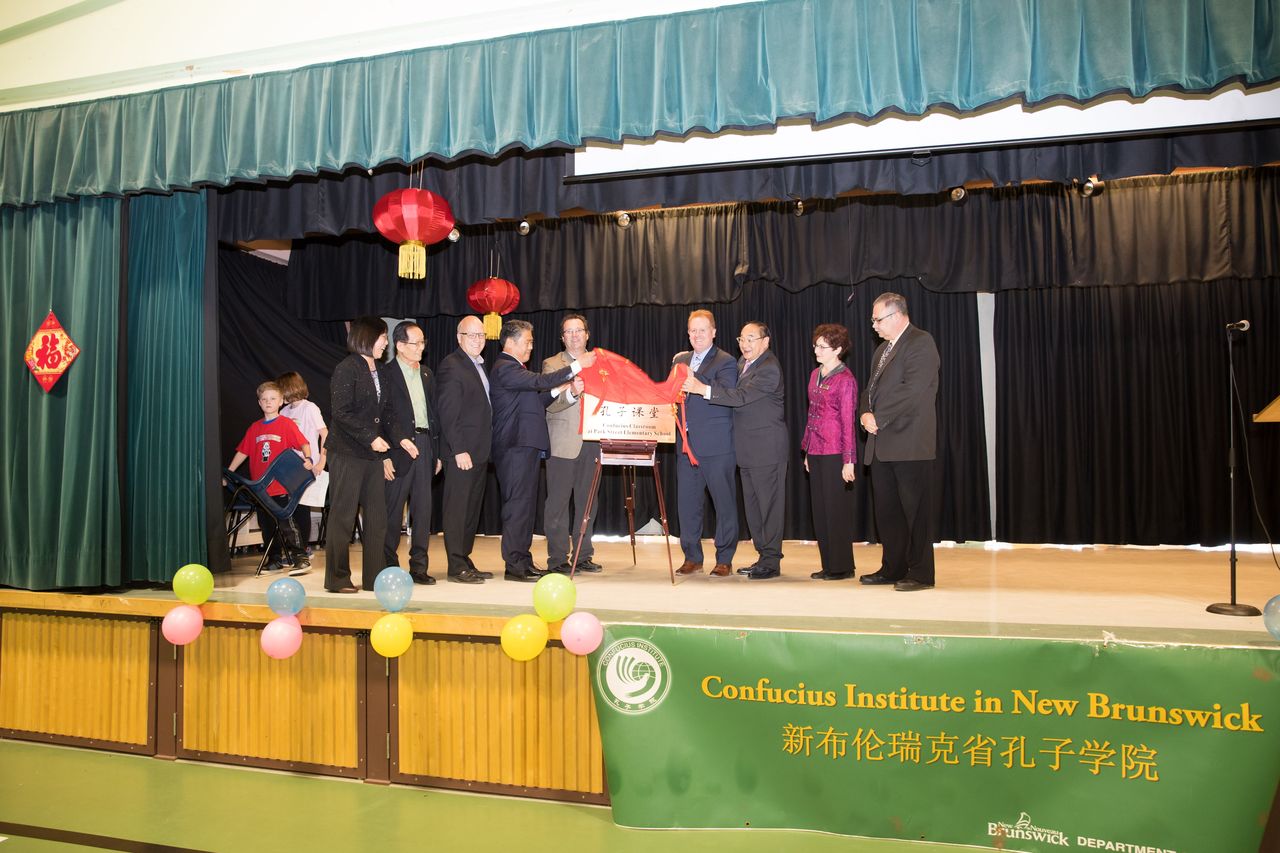 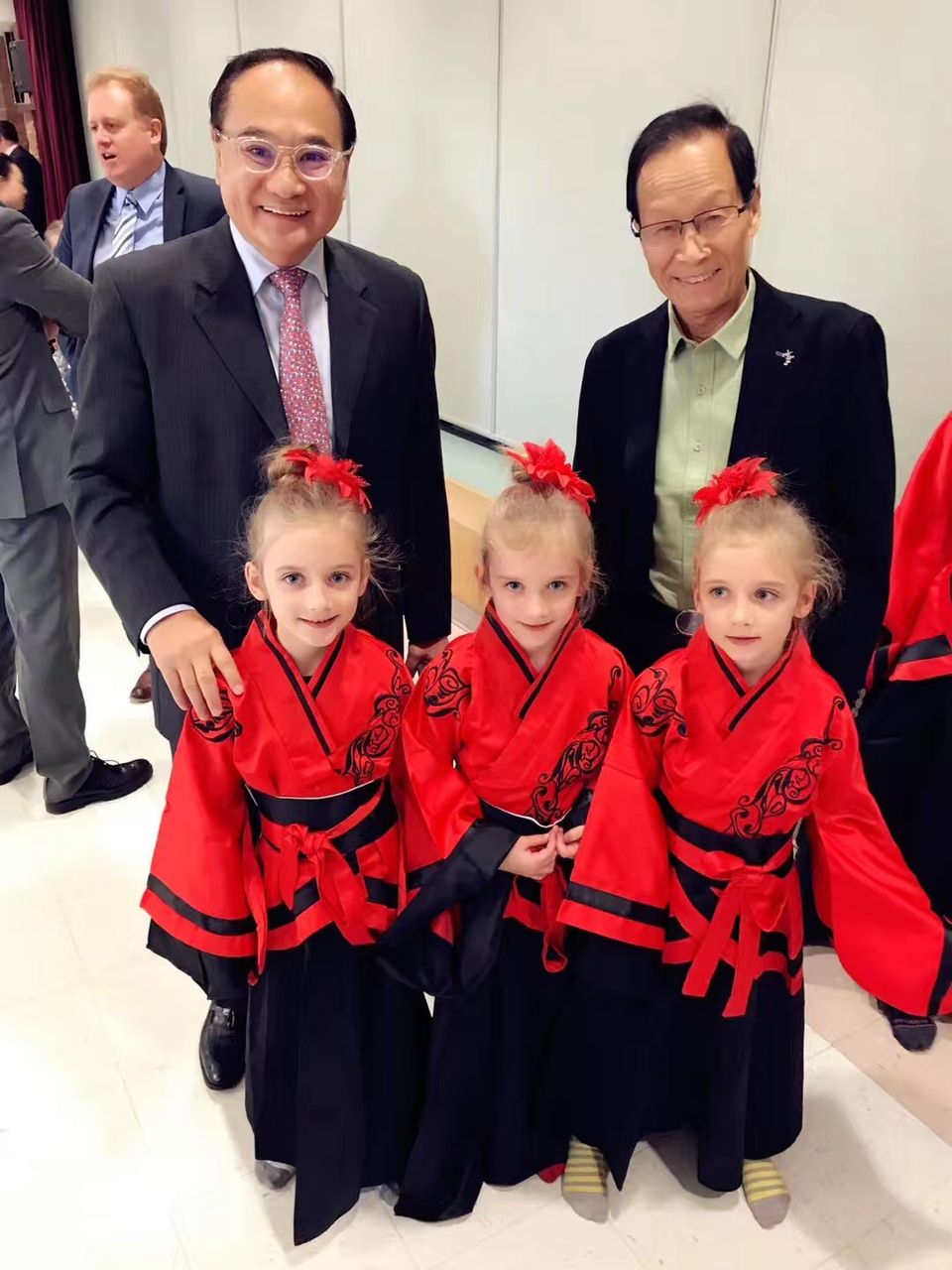 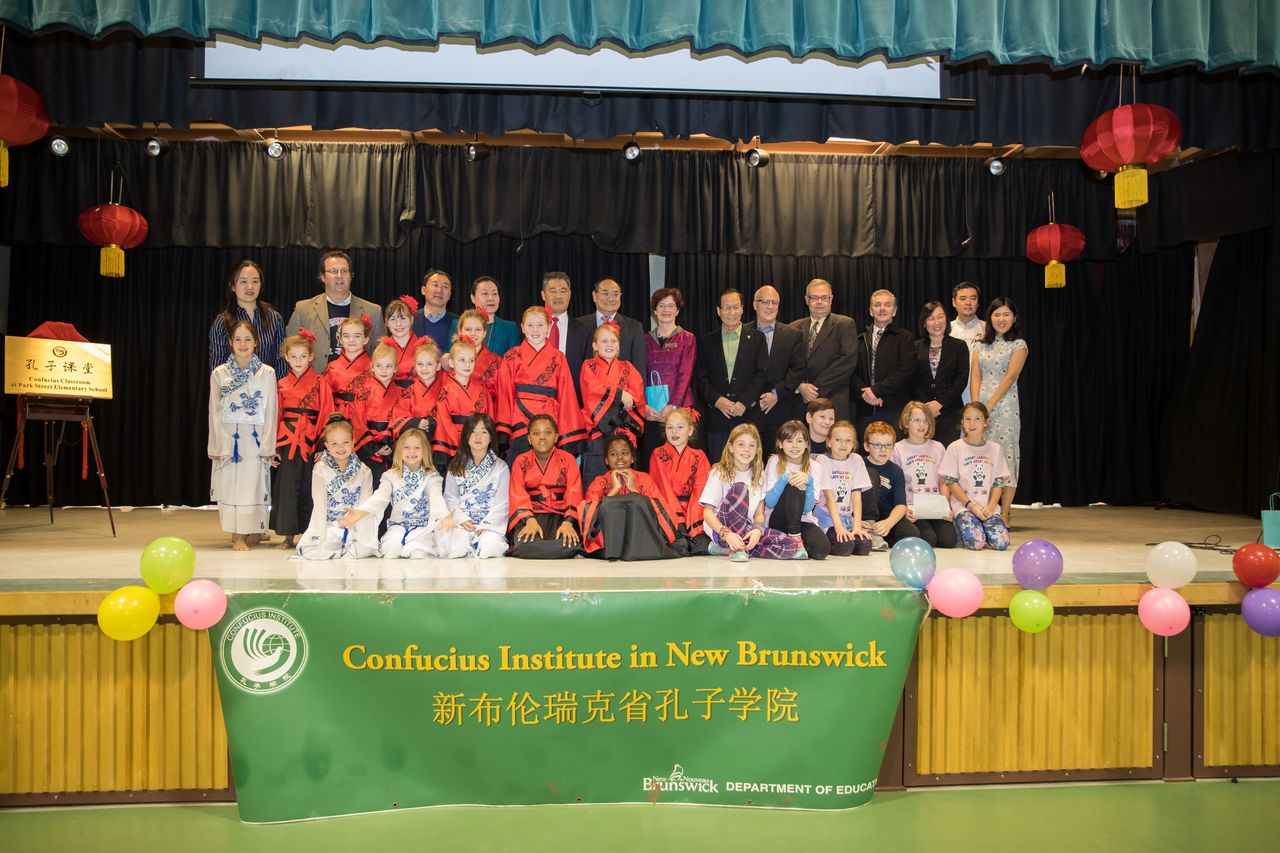 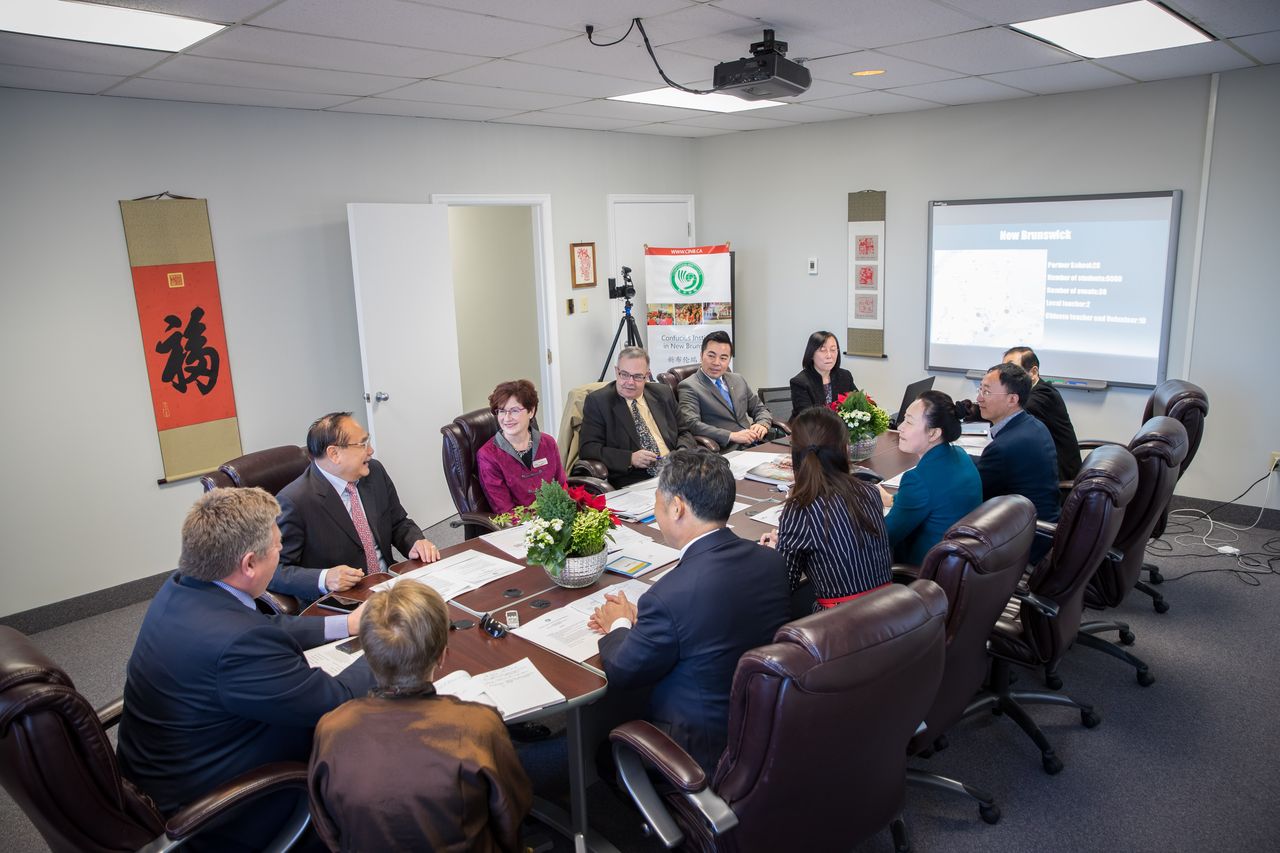 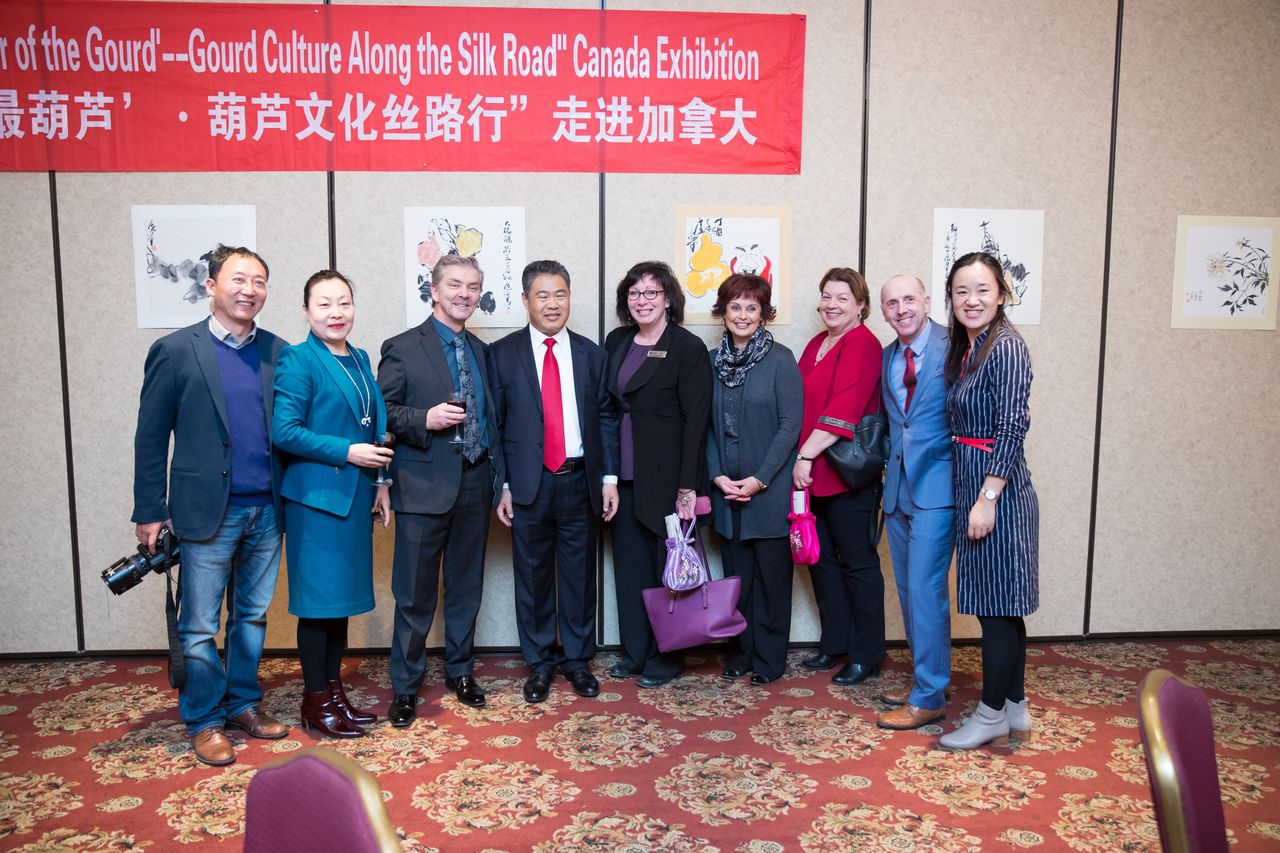 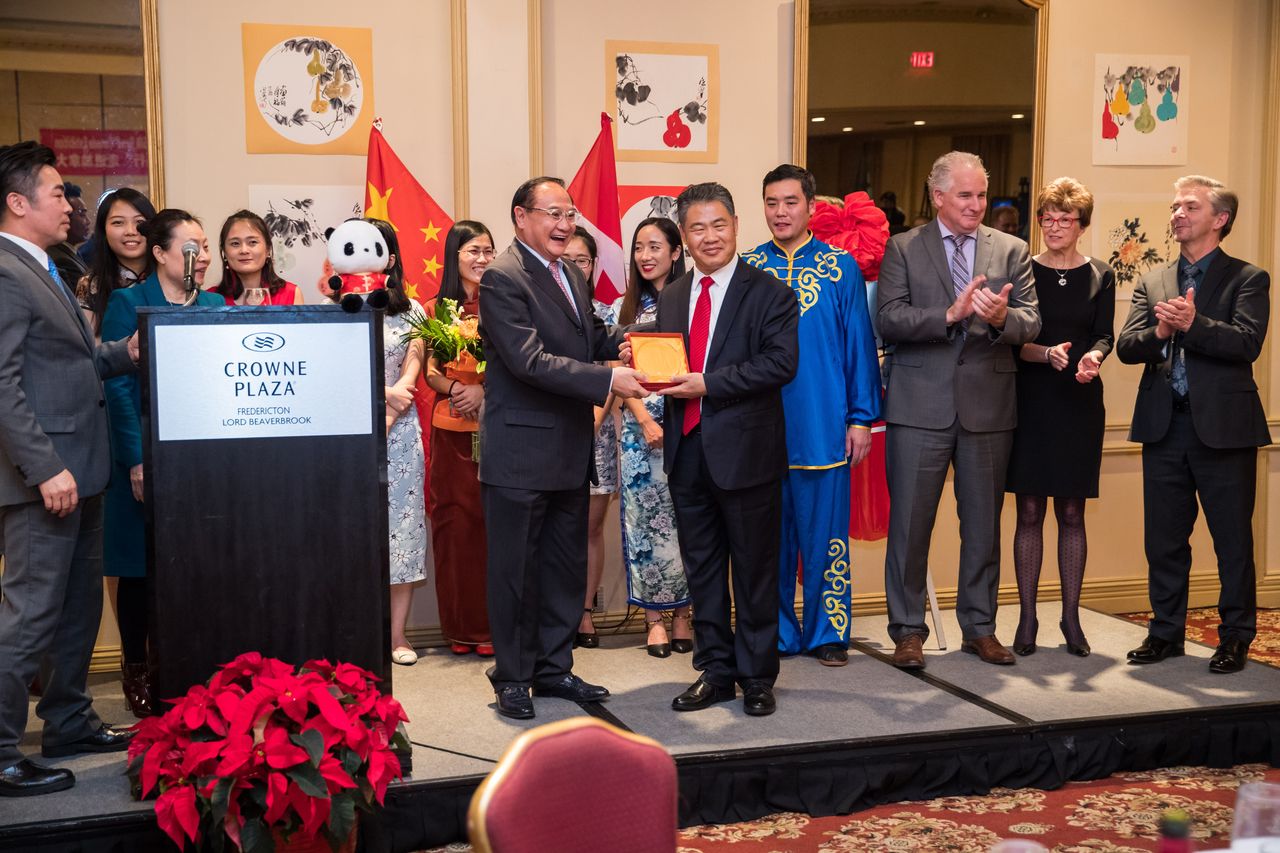 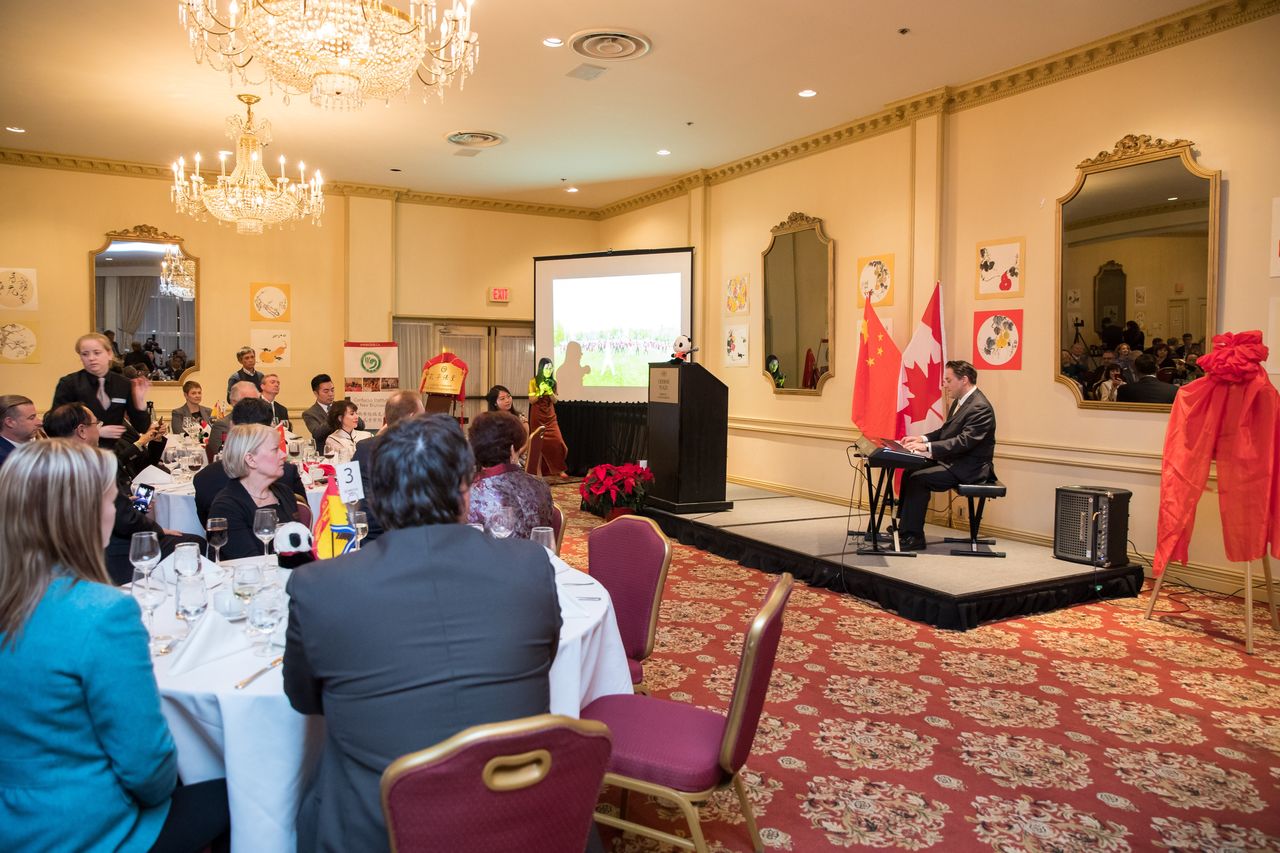 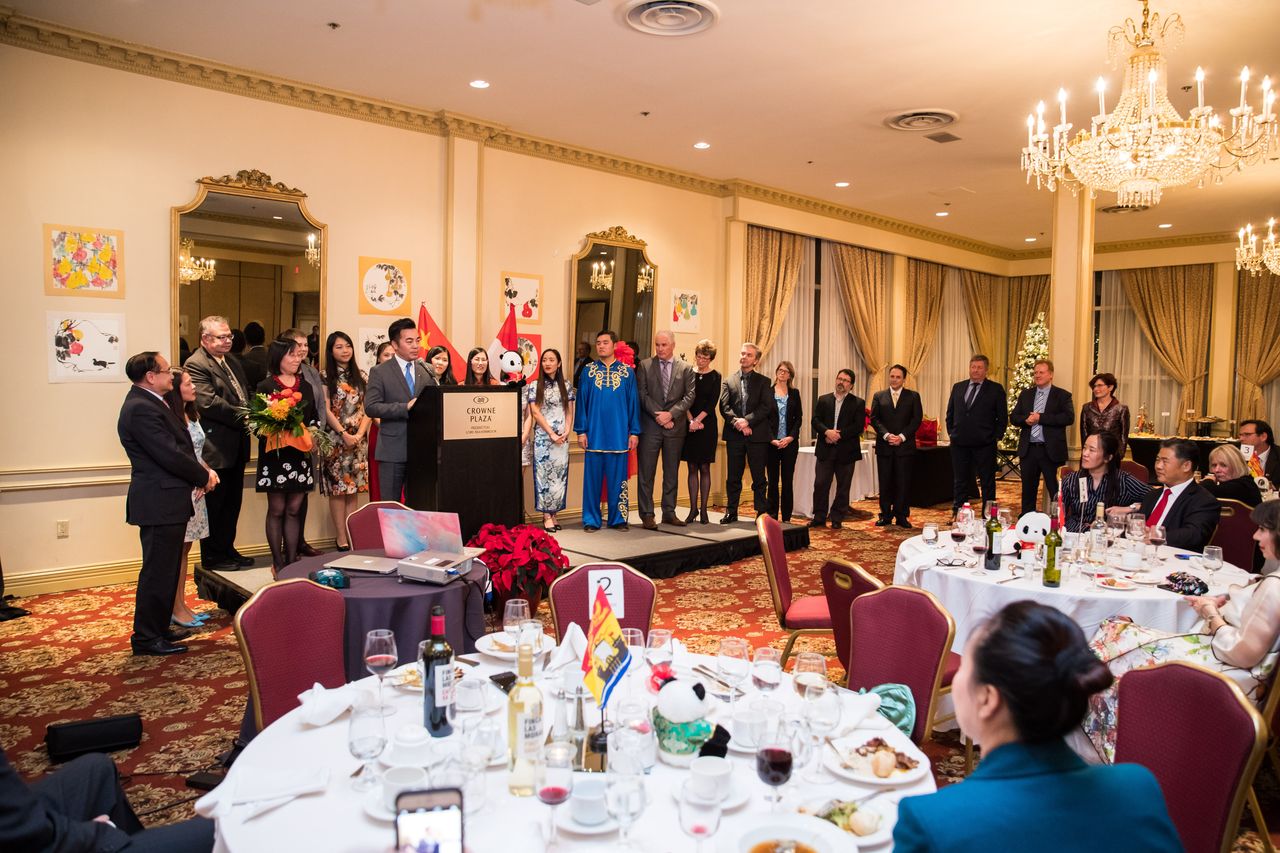 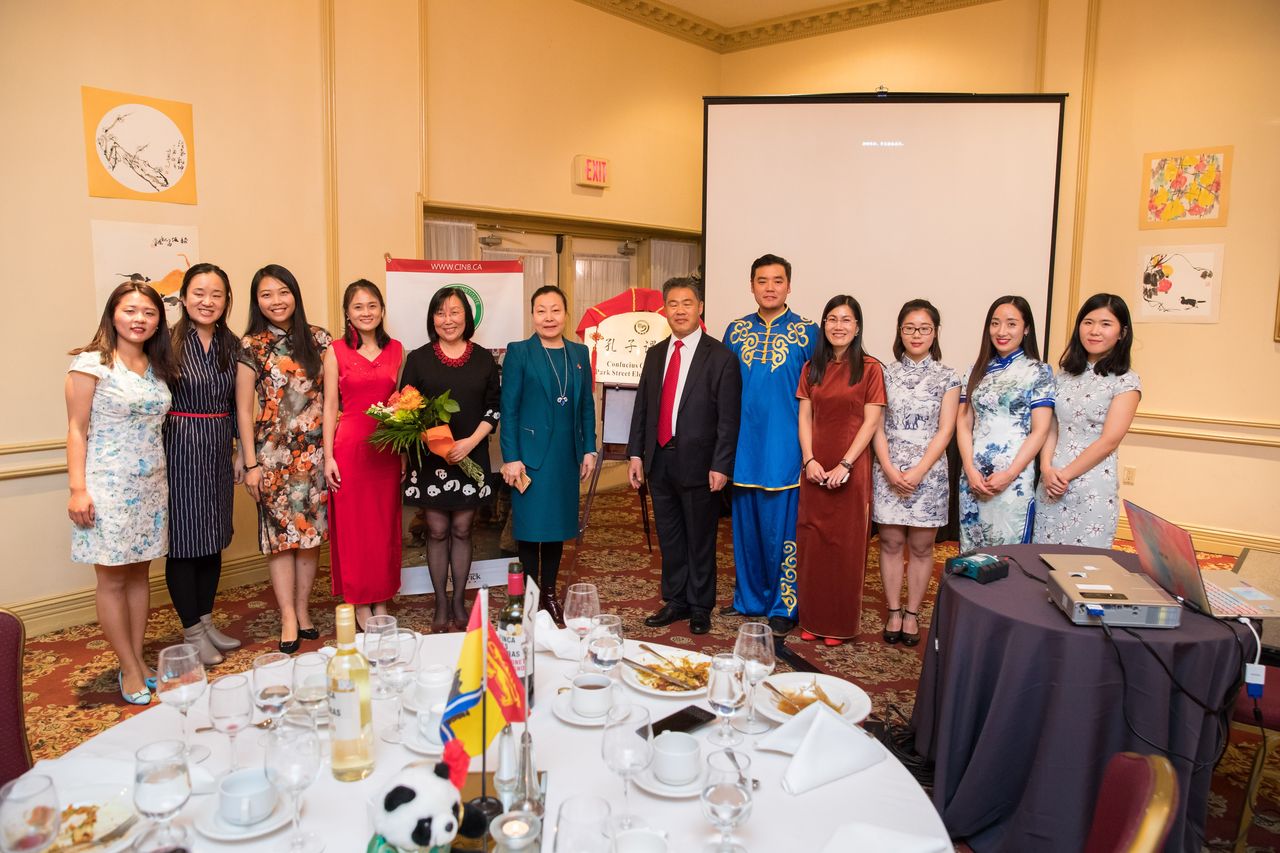 In the morning of Nov.30, the opening ceremony of 1st Confucius Classroom in New Brunswick was held in Park Street Elementary School. Three students of the school host the ceremony in English, French and Chinese. The director of Education Department in Fredericton delivered a speech. He hoped that on the occasion of the 10th of CINB and the 20th anniversary of educational cooperation between AKD and New Brunswick, the cooperation with China would be intensified, China-Canada cultural exchanges would be promoted and friendship between the two countries would be strengthened, which won a round of warm applause from guests present and teachers and students of Park Street Elementary School. Then, in his speech, Mr. Hu Qingxue, vice president of Qufu Normal University congratulated the opening of Confucius Classroom and invited guests to Qufu, the Confucius’s hometown. He also spoke of his firm determination to cultivate more excellent Chinese teachers. Later, the director of Education Department, chairman of CINB, city councillor, Mr. Hu Qingxue and Mr. Wang Benzhong inaugurated for the Confucius Classroom. Under the direction of volunteer Chinese teacher Chen Junfeng, students of Park Street Elementary School gave a wonderful performance with Chinese characteristics, recite of Analects of Confucius, the Dai nationality dance and “ Three Character Classic” Han style dance, which won thunderous applause. Chinese Kong Fu teacher of CINB, Mr. Guan Yuqi lead all students to learn Chinese Kong Fu, which was impressive. After the performance, guests gave gifts to each other and celebrated together.

In the meeting, foreign director, superintendent of CINB, Mrs. Teng Jing made a report on the work summary of CINB in 2017, and the financial report made by Mrs. Dawn Weatherbie.

Board members affirmed and praised the work achievements and efforts of CINB in 2017, and has approved a resolution on further strengthening cooperation between the two sides through the head teacher teaching Chinese credit courses online and offline in the New Brunswick. The meeting was a complete success.

The event kicked off in the beautiful Chinese music of the pianist, the excellent student of CINB, Mr. Roger Lord. The director of the education department addressed the banquet and gave Dr. Francis Pang a gift for the celebration of 20-year friendship between AKD international and New Brunswick.

The vice president of Qufu Normal University, Mr. Hu Qingxue made a speech  on behalf of the Chinese partners and made a keynote speech entitled “ ‘Glamour of the Gourd’—Gourd Culture Along the Silk Road” Canada Exhibition. Then, there was an opening ceremony for the “Gourd Painting Studio”. In order to express his congratulation to CINB, Mr. Hu gave 30 beautiful gourds painting to the CINB which won a round of applause from the audience.

After that, Mrs.Teng Jing was invited to make a speech on stage, and she told a story of that she lead teacher teams to develop Chinese program in the past ten years. and expressed her appreciation to everyone who had contributed to the development of CINB, especially the superintendent of district, board members. The participants expressed their congratulations on the 10th anniversary of the CINB and affirmed the remarkable contribution to enhancing the mutual understanding and friendship between the people of China and Canada made by CINB. The 10th anniversary celebration of the CINB came a successfully conclusion in that evening.

As the Confucius Institute Headquarters and the Consulate General of the People’s Republic of China in Montreal wrote about the letters of congratulation: during the past decade, CINB has been actively involving and serving the local society and upholding the principle of “ language driving communication and culture diving the win-win results”. CINB has become an important window for the eastern Canada community to learn Chinese and know about China. It is believed that through joint efforts, the Confucius Institute in New Brunswick will keep the leading momentum and achieve greater success in the new area!