On June 5th, Chinese Ambassador to Canada Lu Shaye, Minister Counsellor of the Education Office, Yang Xinyu, the Deputy Consul General of the Consulate General of the People’s Republic of China in Montreal, Xing Wenjian with six-member delegation visited New Brunswick (NB). In the morning, Lu Shaye and his entourage visited Park Street Elementary School in Fredericton, which is the first Chinese-English-France trilingual school in the province and the first Confucius Classroom in the province, offering an example for Chinese spreading in other schools. Confucius Institute in New Brunswick (CINB) offers professional Chinese teaching. Over 5000 students are learning Chinese every year, which makes great contribution to friendly communication between Canada and China. Next, ambassador Lu delivered a speech at school and expressed his gratitude to the education department of NB, teachers and students of the school for their efforts in promoting Chinese program. He confirmed the achievements made by CINB in Chinese language promotion project and was impressed by the enthusiasm of students for learning Chinese. In the welcoming ceremony, all students recited Three Character Classic and other Chinese classics. The school’s Chinese dance club performed Blue and White Porcelain, which came to a climax of the atmosphere. After performance, ambassador Lu and his delegation observed a Chinese lesson in Confucius Classroom, and had a cordial conversation with students in three languages. 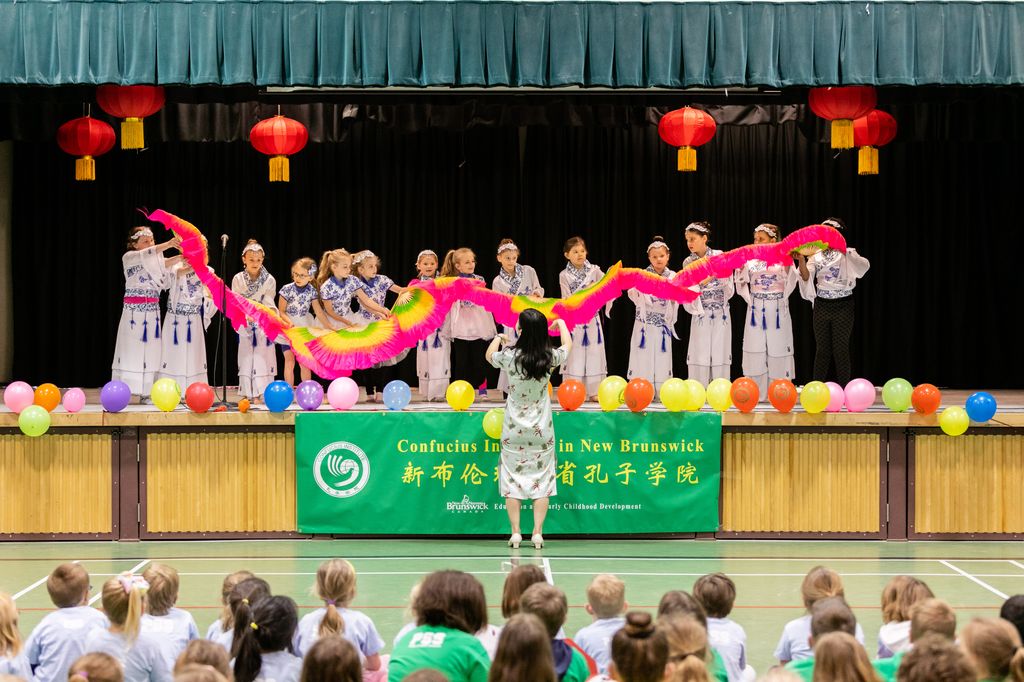 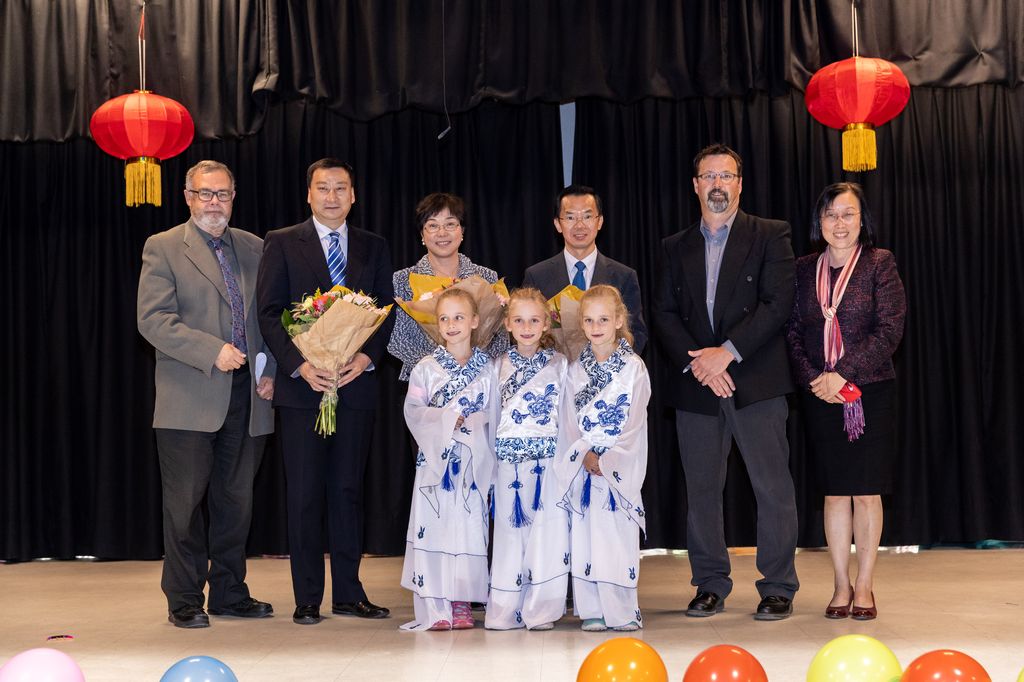 In the afternoon, Lu Shaye went to the provincial governor’s office to attend a reception sponsored by the Ministry of Education of NB. Ms. Jocelyne Roy Vienneau, provincial governor of NB, extended a warm welcome to the ambassador’s visit. She stated that the cultural exchange between China and Canada has a long history. NB has established long-term trade ties with many provinces in China. Chinese culture, attaching much importance to “harmony is precious”, conforms to NB’s life philosophy of nature and harmony and has strong vitality and influence. With enhanced economic and political cooperation between the two countries, NB will further promote Chinese language and culture to an extensive and in-depth level. 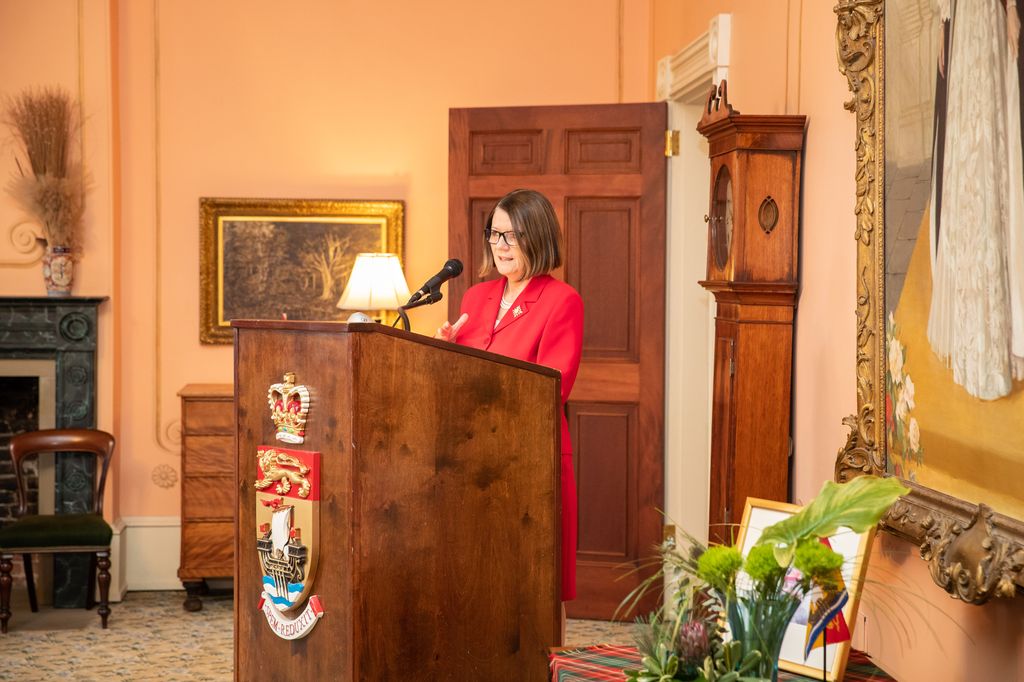 At the reception, Deputy Minister of Education and Early Childhood Development of New Brunswick, President of CINB, John McLaughlin pointed out that cultural development is borderless and the exchanges and cooperation between China and Canada require Chinese talents. He thanked AEI and CINB for offering Chinese learning opportunity and making contributions to cultural communication and Chinese spreading between Canada and China. He also mentioned that CINB created space for multi-cultural communication and broke misunderstanding. It promoted Canadian’s understanding about China and cultivated many students with international views for NB, building a good platform for friendly exchanges between China and Canada. 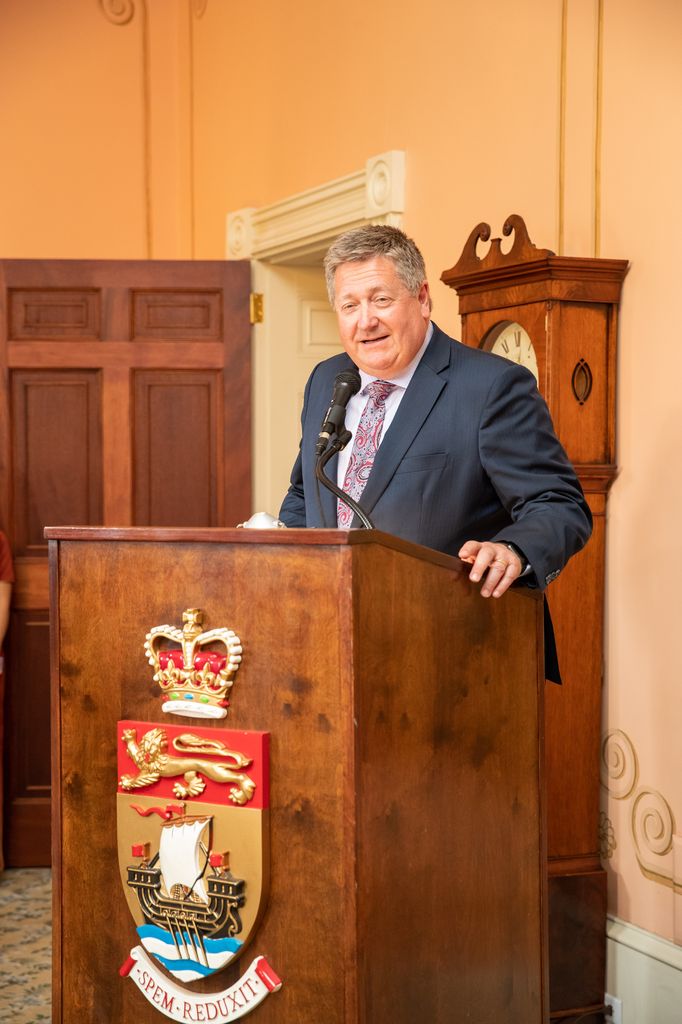 Afterwards, Ambassador Lu Shaye delivered a keynote speech and thanked the Canadian government and people for their support and assistance in Chinese culture spreading. He mentioned that economic, trade and political communication are driven by culture. Only with the mutual efforts and understanding of people in the two countries can we create more benefits for the long-term development. The friendship between Canada and China had a long history, which needs continuous support from people of the two countries. It is the overall consciousness and global vision can we offer great environment for Chinese teaching spreading and Confucius Institute can transcend cultural difference and develop very well. 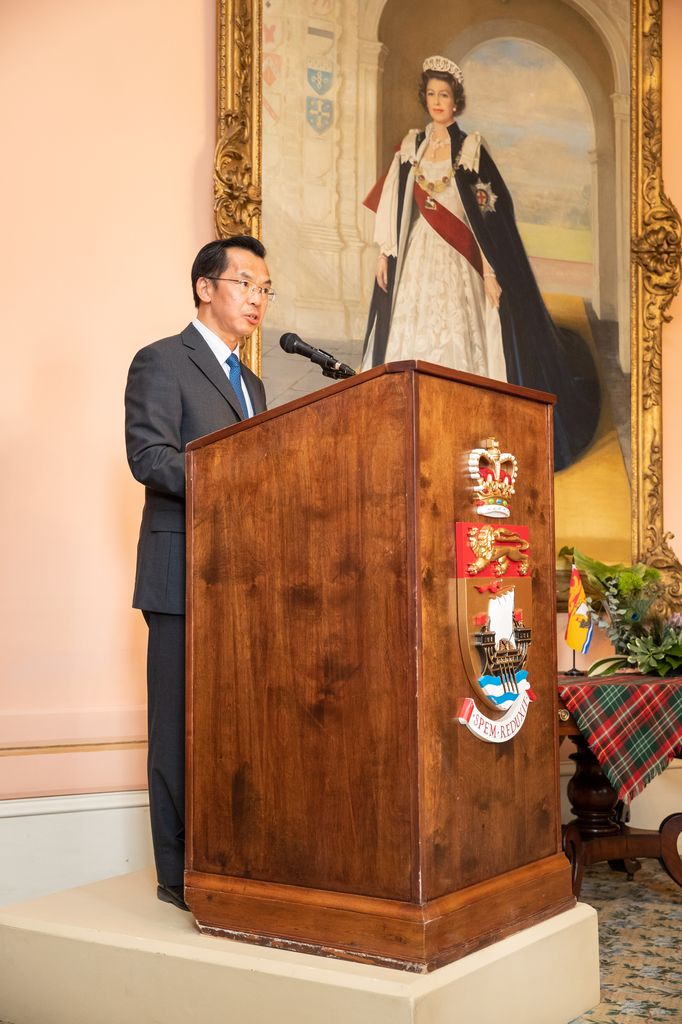 Minister Counsellor, Yang Xinyu, gave a speech and thanked CINB for its great contributions to the Sino-Canadian Cultural Exchange. She pointed that the development of CINB was because of hard work of volunteer Chinese teachers and the support of local cooperation teams. The Vice President of AEI, Executive Director of CINB, Dawn Weatherbie has been working hard for seven years, offering strong support for Chinese program development in NB and promoting CINB programs to go ahead steadily. Because of her outstanding contribution to Chinese teaching and the development of CINB, the ambassador gave her “ Ambassador Award”. This is the first time that this honor has been awarded. 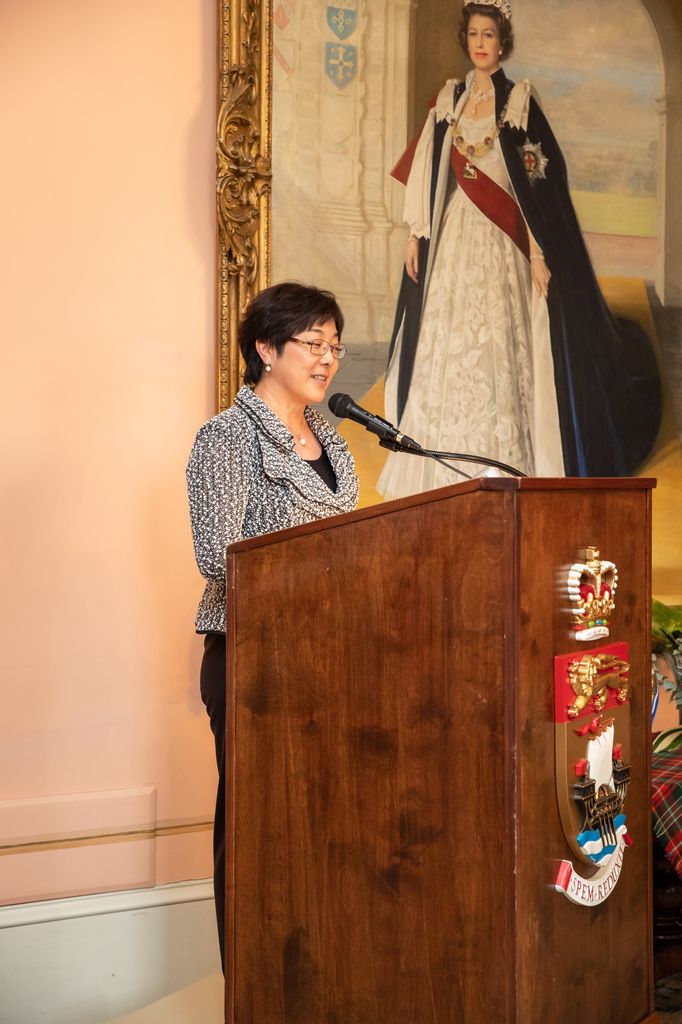 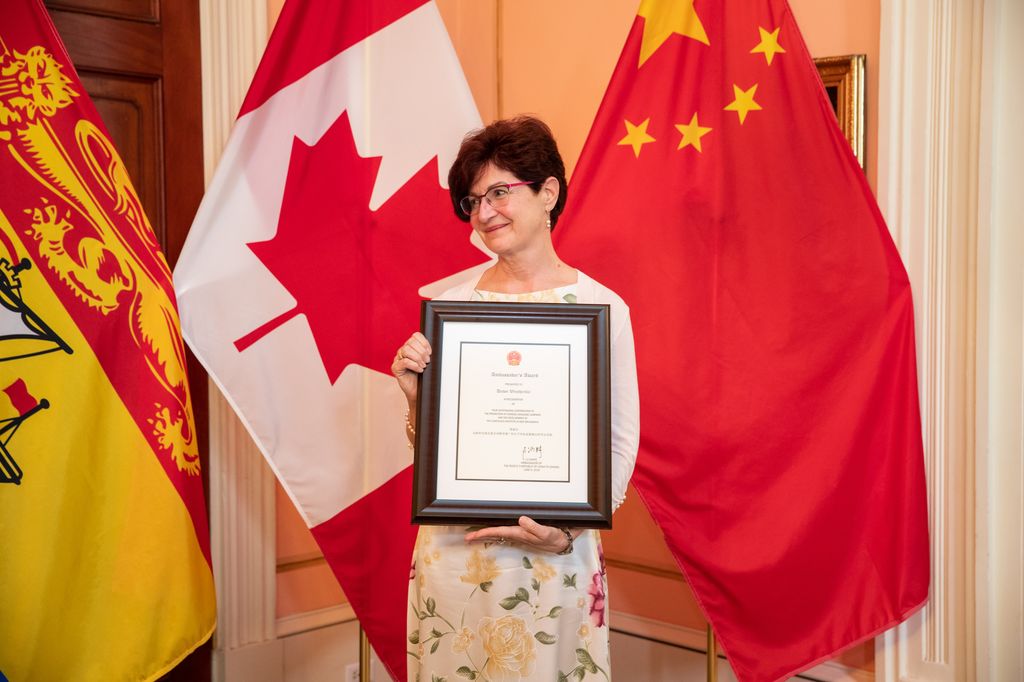 Ms. Dawn Weatherbie is honored with the first “Ambassador Award”

As Foreign Director of CINB, Superintendent of Chinese Teaching, Teng Jing received the Outstanding Contribution Award from the Deputy Minister of Education of NB. Teng Jing with John MacLaughlin, AEI members and all teachers of CINB took a “family” picture and recorded this precious moment. And she said gratefully that the strength of the team like “family” promote the development of CINB. 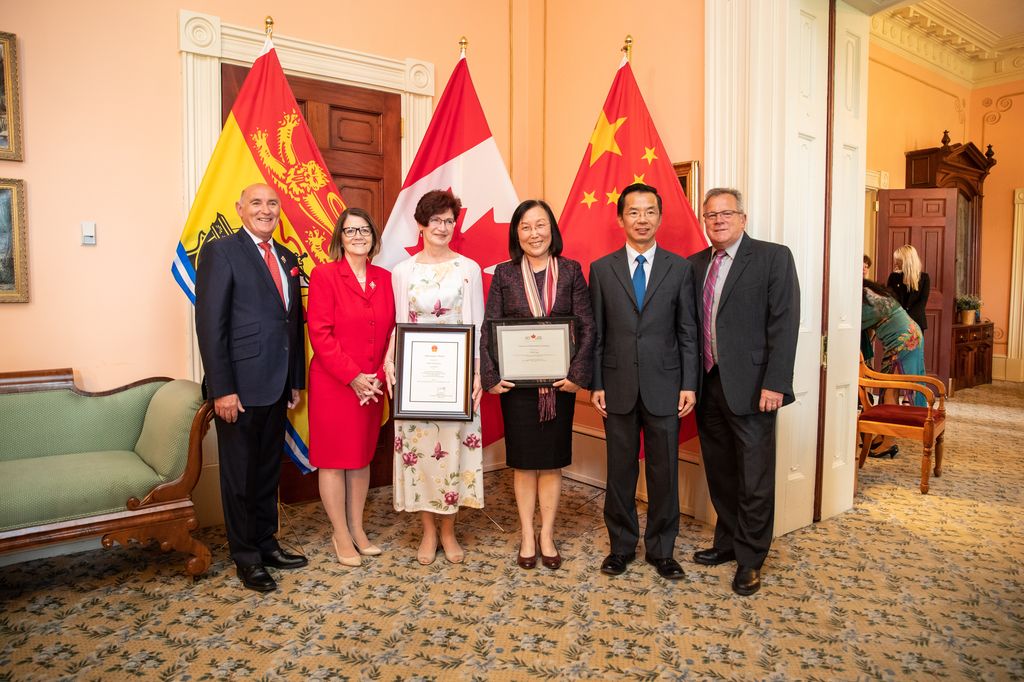 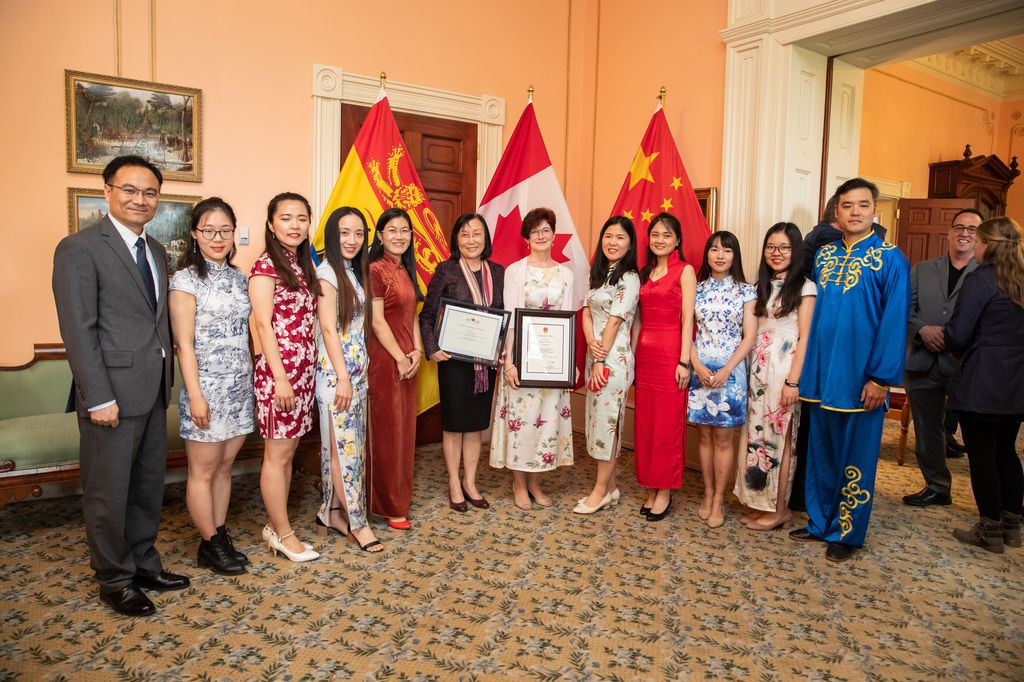 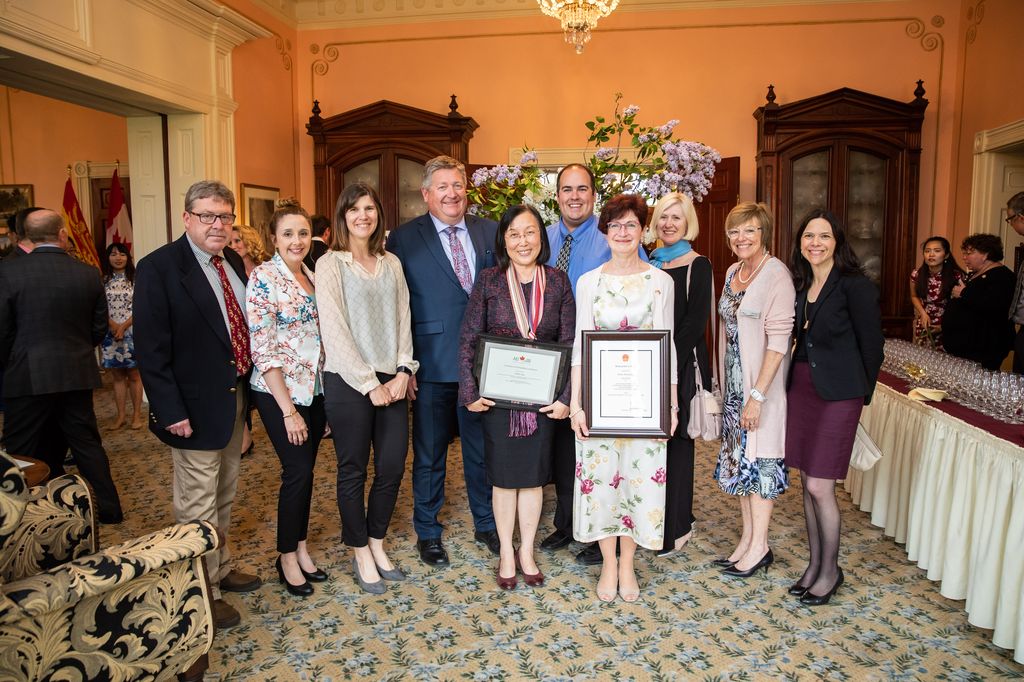 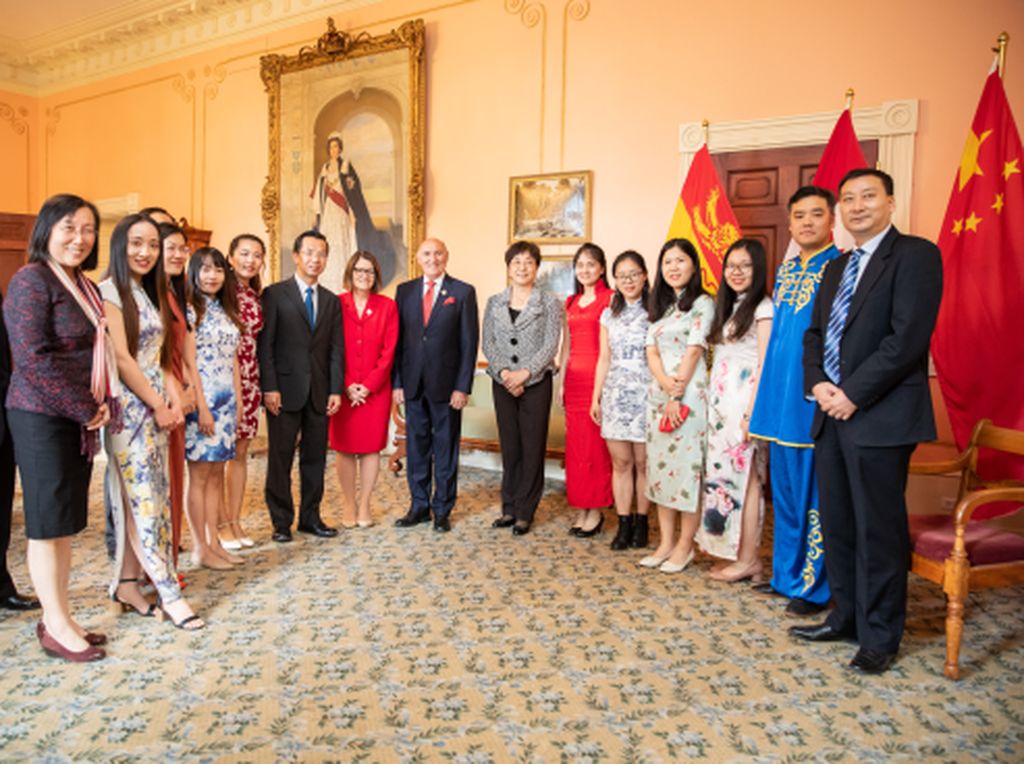 At the reception, representatives of overseas Chinese in the province were invited to attend and brought a wonderful performance of Yangqin, Pipa and Peking Opera. 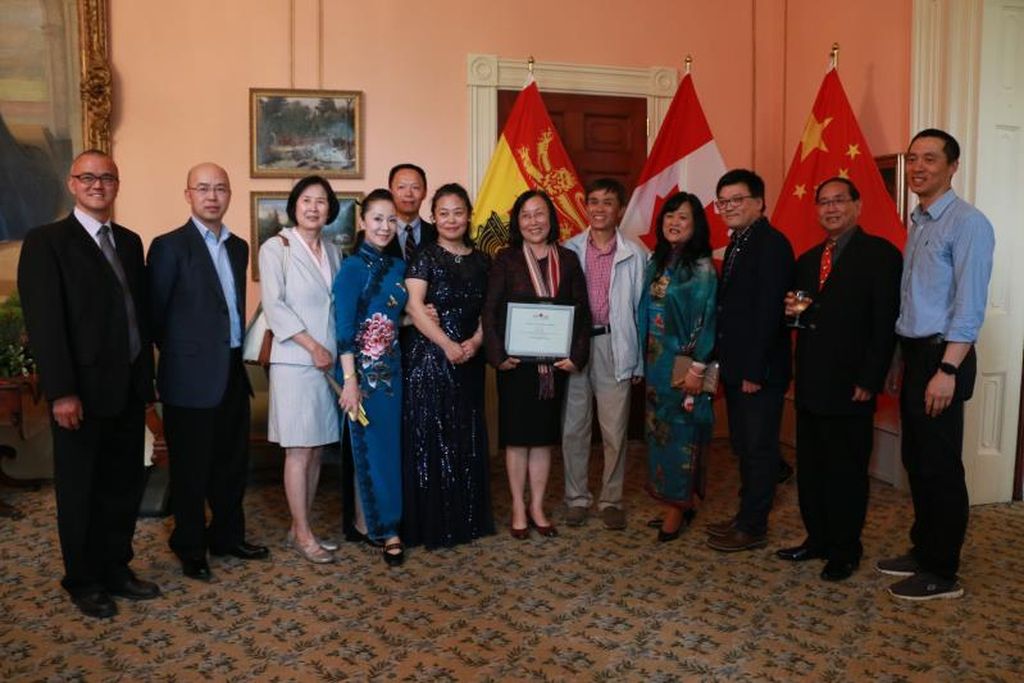 During the visit, the ambassador and his delegation also met with Canadian piano prince, CINB’s outstanding student Roger Lord. 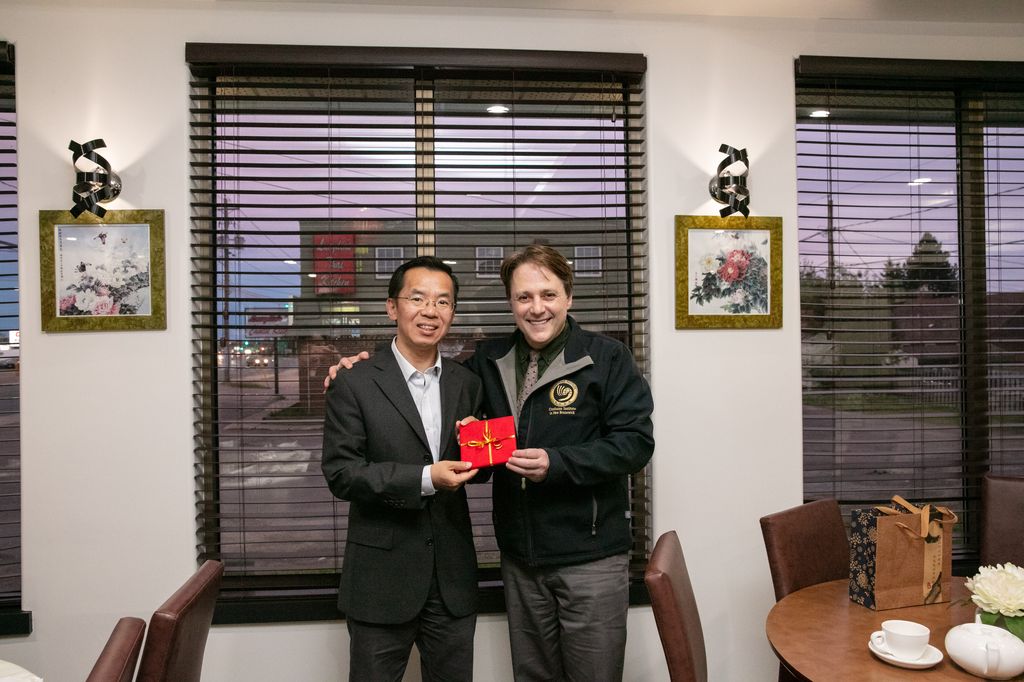 They also visited the former Prime Minister Chretien's niece and Mr. Roderick Morin and Ms. Michèle Suzor and thanked them for their long-term friendship with China, their support for the development of CINB and offering accommodation for Chinese teachers. He said that volunteer Chinese teachers’ life in homestay is best proof for friendly communication between Canadian and Chinese people. It is also an epitome of harmonious coexistence of Canadian and Chinese culture. 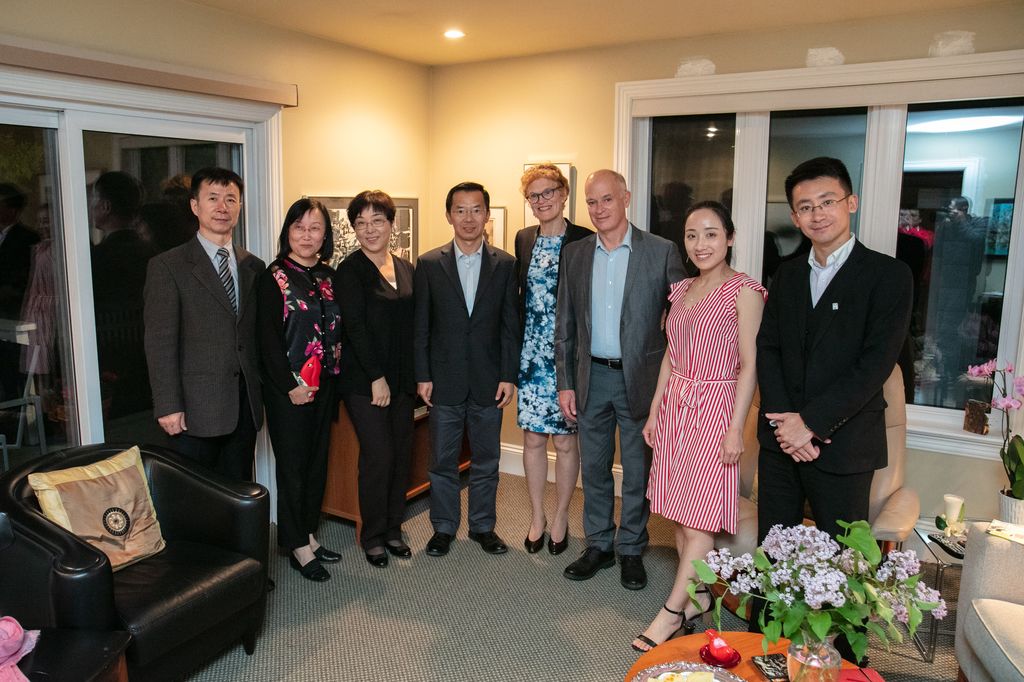 On June.5, Ambassador to Canada, Lu Shaye spoke with the Daily Gleaner. In his discussion with Gleaner, Lu also spoke that China and Canada were recommended to establish inter-provincial communication and dialogue mechanisms to promote cooperation through exchanges, and stressed that in the context of current anti-globalization and trade protectionism, China and Canada should strengthen cooperation to jointly safeguard free trade and also economic globalization.
The news of Lu Shaye, the ambassador to Canada, visiting CINB were published on the official news websites of the Embassy of China in Canada, the Consulate General of China in Montreal, Confucius Institute Headquarters/Hanban, as well as the Qufu Normal University. The ambassador’s visit opened a new chapter of strengthened communication and cooperation between China and NB, which laid a solid foundation of bilateral cooperation on educational, cultural communication and other fields. At the same time, it confirms the efforts and achievements CINB has made in Chinese teaching and cultural spreading and inspired CINB to go further in the future.

Related news on Embassy of China in Canada official website