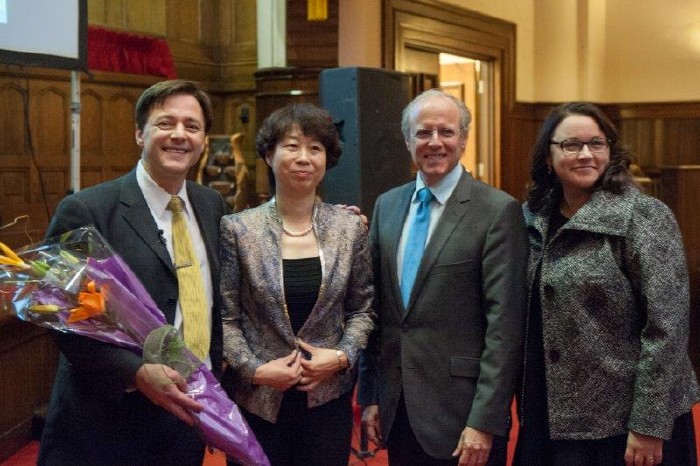 On November 25th 2013, Confucius Institute in New Brunswick hosted the launch of Moncton’s world-renowned pianist Roger Lord’s CD Chinese Treasures at the Moncton Community Peace Center. The Mayor of the City of Moncton, Mr. George LeBlanc, the Consul General of the Chinese Consulate - General in Montreal, Ms Zhao Jiangping, and the Provincial Minister of Education, Ms Marie-Claude Blais attended this launch and addressed remarks.
The launch started with a wonderful Chinese traditional lion dances, followed by a Tai-chi Fan performance by Chinese volunteer teacher An Yang and her students. Dr. Roger Lord introduced the recording process of the Chinese Treasures CD in China, expressed his love of Chinese music. Then he played “Autumn Moon over a Clam Lake ", " Liuyang River", "Colorful Clouds Chasing the Moon" and some other pieces of Chinese traditional classic music. His wonderful performance aroused lasting applauses from the audience for many times. After the performance, the audience tasted the Chinese traditional food and bought the CDs, enjoying both physically and spiritually. CBC shot the whole progress and interviewed the Confucius Institute students.

Roger Lord is the first non-Chinese pianist in the world to press a CD dedicated entirely to Chinese traditional music. Hailed as “The Piano Prince of Canada” by the China Daily in Beijing, Mr. Lord played his first concert in China in 1999. Since then, he has travelled to perform in most of the major cities around China for about 24 times.

The launch not only enhanced the Canadian public understanding of Chinese culture, especially Chinese traditional music, but also strengthened the cultural exchange between China and Canada.